I had to knock down the dust in Erin's room some yesterday.  I actually spend a lot of time in there and the major surfaces were okay, but some of the shelves don't get a lot of practical cleaning.


Okay, so beyond the I-don't-deep-clean-my-house-regularly confession, there is the other bereaved-parent confession coming.  Twenty-eight months later, and I haven't actually done much with Erin's stuff.  I did give her Keen's to Ian last Friday (for keeps) when he got his muddy mucking around with the geese, but mainly her room is morphing into something else (who knows what?) at a glacier's pace.


I finally got around to dusting the bottom shelf of her bedside table where she stacked the books she was reading.  There they sat, each with a thin skin of petrified dust on them, their places marked, mid-read.  Some had precious store-bought bookmarks holding the place, including a special one carried back from Egypt by a friend who knew Erin's love for books.  An Underarmour tag just as proudly marked her progress in another.  My favorite?  A much doodled upon notecard spelling out the first ten amendments to The Constitution and what they protect. 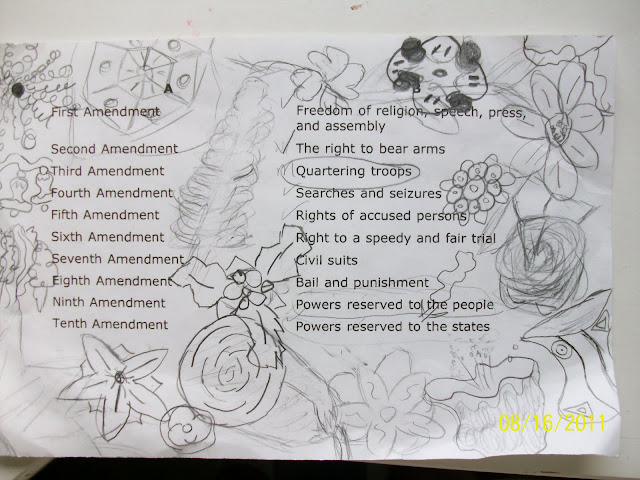 I dusted under, around, and in the books, then instead of re-shelving them, stacked them back up at the bottom of the bedside table:


This is just one more way that I take after Erin.


I took a few books on vacation and finished three.  I started with Denis Johnson's Tree of Smoke, which despite having won the National Book Award a few years ago AND despite having bee given a free hardback copy, I had avoided, mainly because I just have negative views of the Vietnam War and our involvement, not to mention the whole spy/covert operations/screwing natives and manipulating people theme.  I decided to suck it up and give it a try.  I can't say the book made me feel any better about Vietnam or spooks, but once I started, it compelled me to finish it.  It was much different than I expected with all the characters being broken and and interesting (and thus accessible).  Of course, there were difficult and brutal parts, but also passages that were so evocative that I had to keep picking the book back up, even when I knew I wouldn't like what I would have to read next.


I also finished a murder mystery called The Pawn by Steven James, which I had started as a take-to-the-gym, read-while-you-stationary-bike book.  Spoiler Alert! Since it turned out that the serial killer was actually two serial killers (who had known each other as teens), it turns out I couldn't follow the plot line unless I focused while I read, rather than multitasking.  Being vacation and all, I didn't feel too guilty about just sitting in a chair on the balcony with my feet up reading from time to time.


Even though I had started a couple of other books before we left Texas and hauled them around with me,  I couldn't help looking for something else to read.  In Taos, I found a locally-owned book store called Moby Dickens and on the advice of the owner, bought three books by southwestern writers (other than Tony Hillerman, who I was caught up on).  I finished my vacation reading on the drive home with Bless Me, Ultima by Rudolfo Anaya.  And while the bodies stacked up in this book just like in the other two, it was completely unlike them--much gentler and reflective, as coming of age stories can be.


After I made it home, I started and finished another of my Taos books:  J. Michael Orenduff's first pot thief book:  The Pot Thief Who Studied Pythagoras, whose gentle self-deprecating humor and practically bloodless mrders helped me transition back into the world where more was expected of me than to drink fine coffee in the morning, fine wine in the evening and while away the hours in between.


Now I'm back to the grind (almost. . . my semester starts two weeks from today).  I have my latest Mother-Daughter book club book at hand:  Dicken's A Tale of Two Cities, which I have always (at least since tenth grade) counted as one of my top five books of all time And which I didn't recognize a word of, beyond the opening paragraph (you know "It was the best or times.   It was the worst of times. . . ") when I started it the other day.   I am also coping with Scott Hendrix's (no relation to Jimi Hendrix) Recultivating the Vineyard, which Walter and I chose for our Sunday School class to use in our study of the Reformation this fall.


Quick, you can tell that I am missing the third leg of my reading stool.  Give me a light and fun suggestion that can balance off the other two.  I'm considering this one by Will Lacey if it gets into print soon enough.
at 2:31 PM 7 comments:

Eat Your Greens (and Reds and Blues and Yellows)


I was going to write about the three books I read on vacation, but I will put that off a day or two.  This photo (with the explanation behind it) came across my news feed, and it was too cool not to share.  Once you look at the photo, click here and read about what you are seeing.  Isn't science/the natural world wonderful and endlessly fascinating? 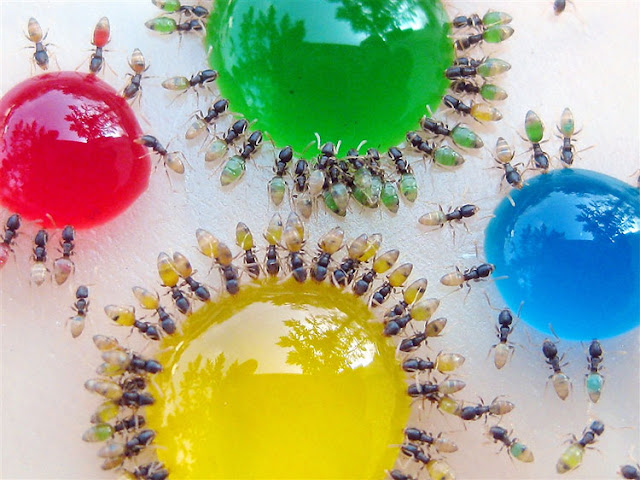 Walter and I spent the week in Taos at an ecolodge called El Monte Sagrado, but instead of having body polishes, hot towel infusions, and seaweed wraps, we opted for thigh burner hikes.  We did the Devisadero Loop Trail which took us up to the peak of Devisadero and then along the ridgeline, which may be the only expert trail I have ever hiked.  We managed the six miles and 1100 foot climb in just under three hours--probably not evenly distributed going up and going down.  Here I am pretending to have planted the flag at the summit. 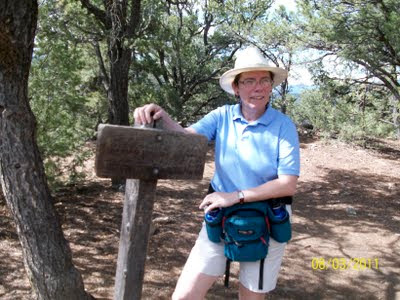 Amazingly, hikers had built a replica of Walter's green chair right by where I had just staked out ownership to the mountaintop, so we could catch our breath before we headed down: 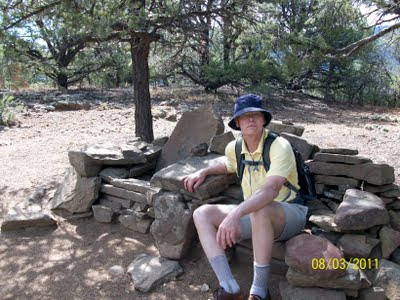 Another of our hikes took us part way up Wheeler Peak, the highest mountain in New Mexico at 13,000+ feet.  We paused at 11,100 feet when we got to Williams Lake, and then skirted the lake and pushed a little further to see a charming waterfall (I took four shots trying to capture the wonder of the water crashing down, then bubbling over the rocks, and finally, slowing to form the source of the lake, but once again you have to trust me that my photographic skill set is a shallow pool that needs some heavy dredging).


Coming down from the waterfall, I decided to try the camera once again to capture the spreading vista in front of me.  I even clicked through the setting options and found one called panorama.  Never used it before.  I mean, it's not like I command sweeping visual fields back in Bryan, or really most places I go on a regular basis.  Looking through the last twenty-five years of photos I have taken, they are almost all birthday parties, Christmas Eve or morning, or Easter Sunday family groupings.  No real need for a wide angle lens on those occasions.


Anyway, I switched over to the panorama setting, was momentarily confused because I had to choose left-to-right or right-to-left, and I had no idea what the correct answer was.  Ultimately, with a little experimentation, I realized I was supposed to take a series of shots of the scene and then something magic would happen.


I did, and after each shot the camera asked me if I wanted to stitch.  After the third shot, I said "Yes" and this is what came out:

Hard to believe, but if you pay attention and are willing to experiment, you can learn new stuff.  Living Proof:  I learned to stitch with my camera.
at 11:25 AM 3 comments: