Day 13 (continued)--And lest you think that snow one day and beach the next is a stretch, when we left Kiama to head home we had to drive through a part of New South Wales that was a rainforest microclimate. 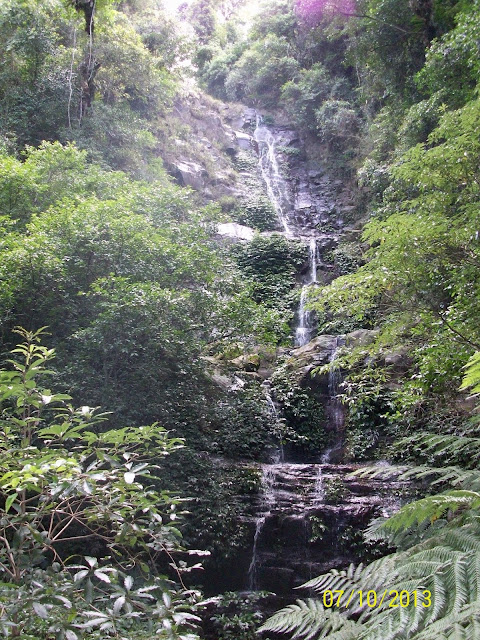 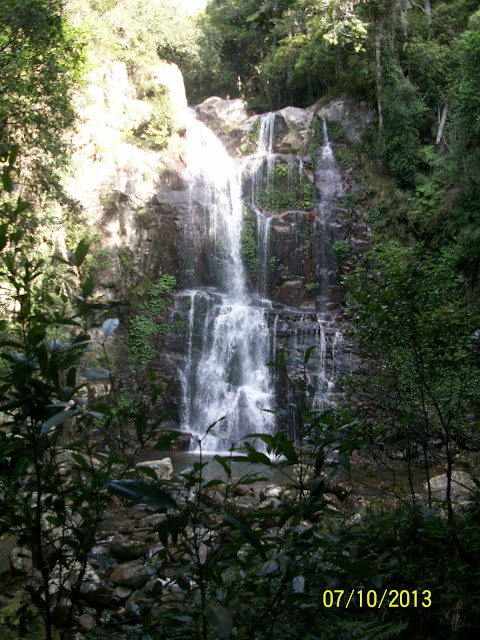 We also stopped at place called the Illawarra Fly Walk which has cat walks suspecded at the level of the treetops above the rainforest.  When Adam and I climbed even higher on the watch tower above the treetop walkway, we could see to coastal Wallangong and a hundred miles in every direction. 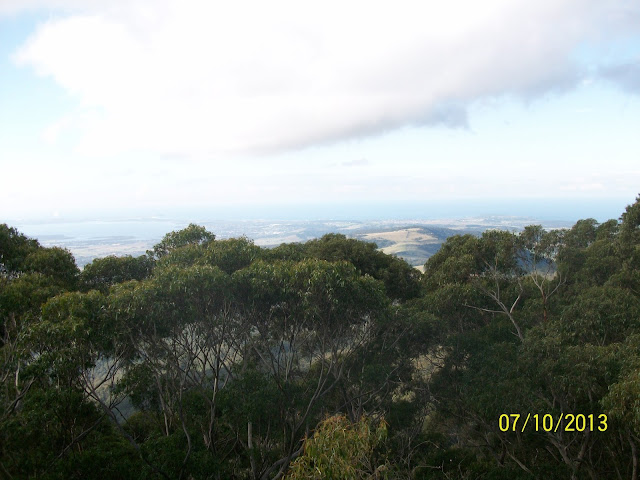 Day 12--Walter, Adam, and I peeled off in the rental car and headed down to the coast.  On the way, we stopped off at Fitzroy Falls 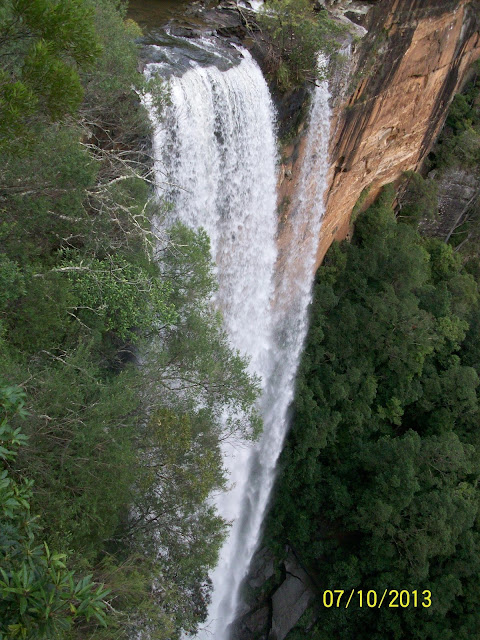 and then wound our way through Kangaroo Valley which is as different from the Snowy Mountains as you can imagine.  I pictured a road winding through pasture with herds of kangaroo hanging around and maybe a kangaroo-herd keeping watch.  When we drove through, I realized we were sooo wrong.  Kangaroo Valley was like driving through the set of The Shire from Lord of the Ring.  I really thought I saw a hobbit.

Day 13--We stayed in Kiama, two blocks from the beach.

and two blocks from the Kiama blow hole. 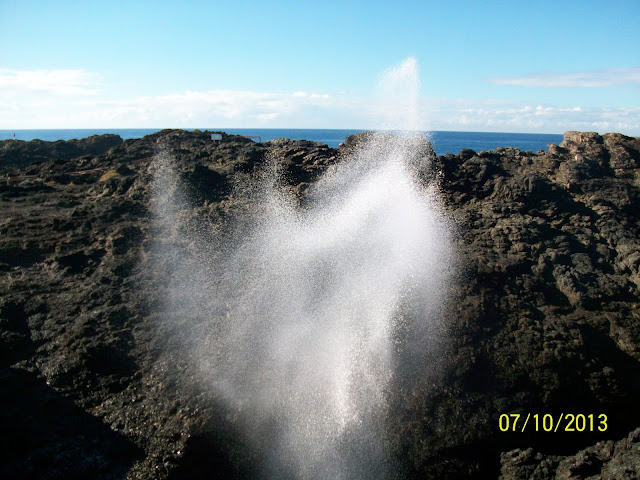 Day 10--Our trip moved further west and to higher elevations.  We had to stop in at Jindbyne to get fitted for our snow shoes before we checked in at the Crackenback Farm.  Snow isn't common in Australia, except here, in the Snowy Mountains. 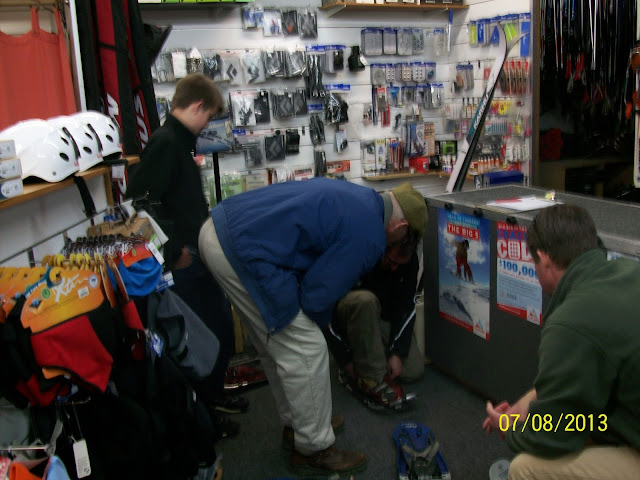 Day 11--We headed to the top of the Porcupine Summit.  Adam and I stopped for the first photo op at a stand of snow gum trees. 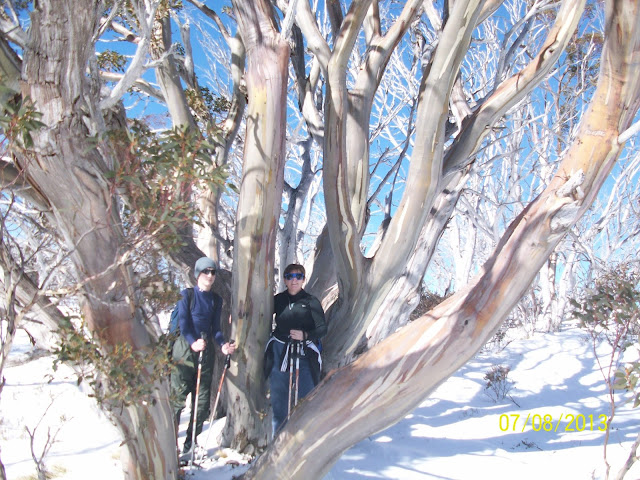 We actually made it up to the very peak and and had this panoramic view.

Sometimes you have so much fun, you don't stop to talk about it.  So today is catch up day.

Day 8--Day tripping.  We all loaded up and headed west to see the Blue Mountains:  picnicking at Wentworth Falls, a stop by Sublime Point (how yummy is that moniker for an inspiring view?), 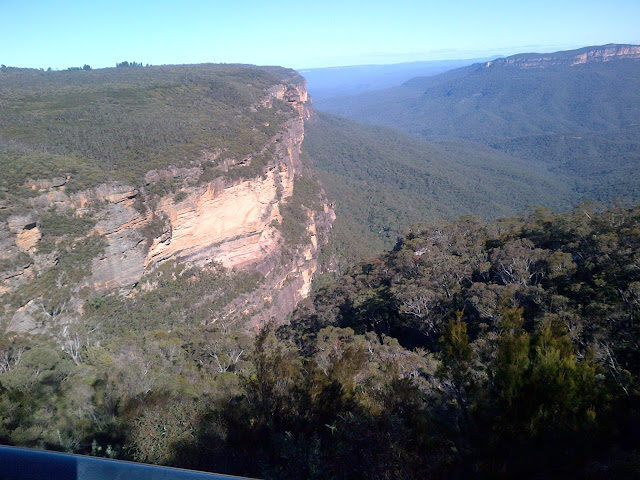 We started our excursion.  First stop Canberra (pronounced Canbra) where we visited both the Australian War Memorial (for Walter's book on history, memory, and identity) and the National Museum of Australia.  While we saw many mazing sites that deserved photos, I chose two of the same subject, an unknown Australian Serviceman, because he had a striking resemblance to WB. 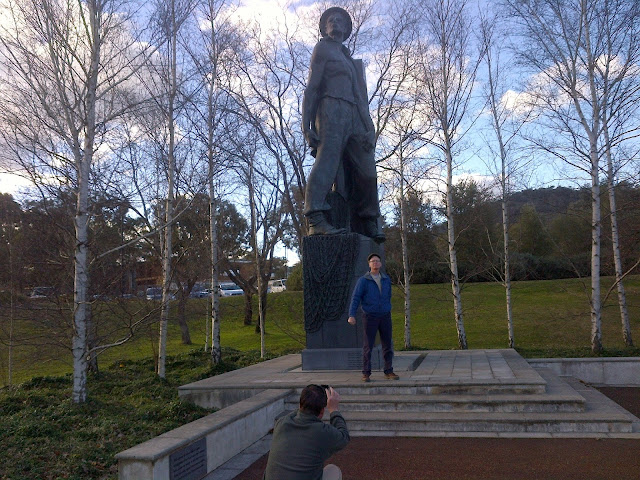 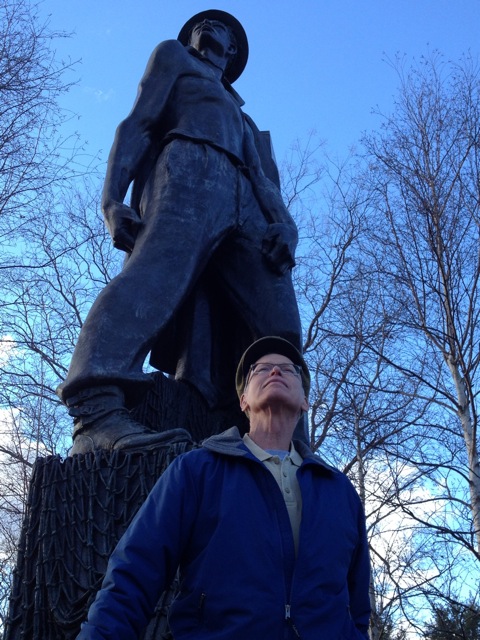 Day 6--Walter and I packed up the bags, hopped a train, and ended up in Linden, NSW.  The Tjoelkers home is brilliant, tucked into the edge of national park in the Blue Mountains.  After a quick tour about the house, Adam was excited to demonstrate his cooking prowess, learned in cooking technology at school.  He prepped his space and as he cored the first apple the knife slipped.  We spent the next six hours exploring the intricacies of the Australian health system. 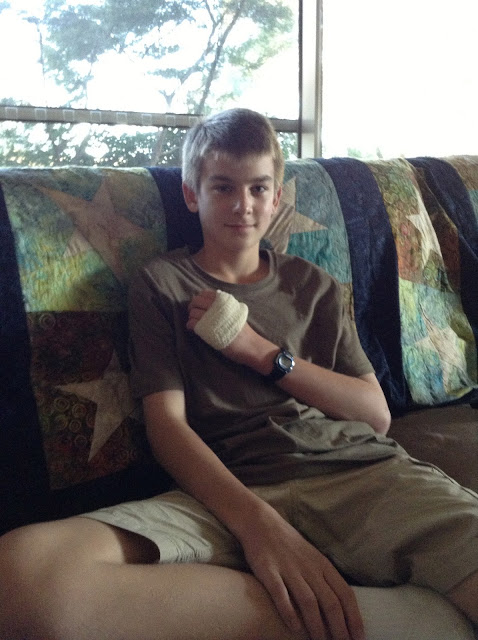 Six stitches on the web between his thumb and forefinger on his violin hand.  I think he will still be able to make it to Carnegie Hall, and also to the Sydney Opera House where he has a solo at the end of the month. 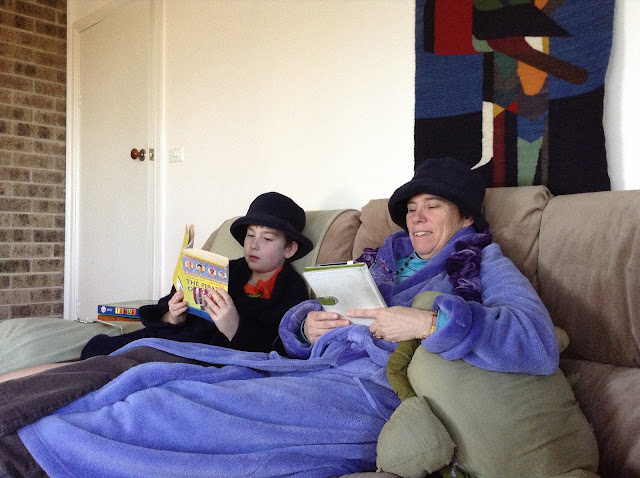 Day 4.5--We capped off our 4th day with a rooftop dining experience at the Sydney Cafe.  I won't rub it in that we are experiencing brilliant weather (high expected today of 70F), but I will say that the roof view from atop the fifth story of the historic Sydney Charter House was sublime.  Unfortunately, I'm a bad photographer (but here is an attempt at the Harbor Bridge and to the right, the edge of the Opera House:

Day 5--I'm not sure what it's like to travel and not see folks we know  We knew we'd be with the Tjoelkers, but we also had the good fortune to connect with some of the Keblises.  Hilary taught 6th grade math at Jane Long when Erin was there ,and Cat was a brilliant all-around soccer player from the earliest days, who I apparently didn't ruin by bad coaching when she was a elementary and intermediate school student. 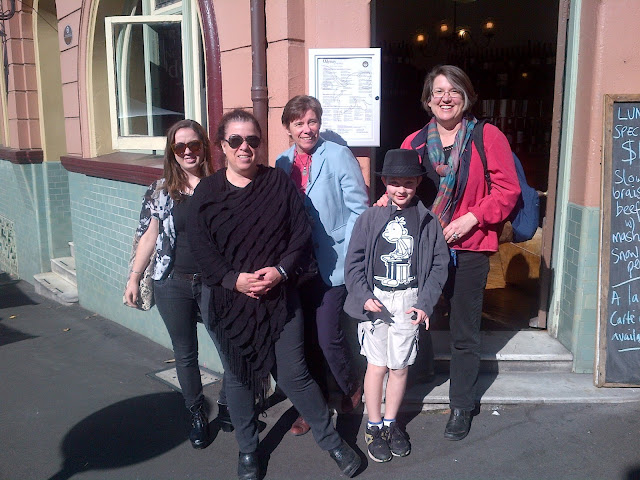 I could actually go on and on about the Royal Botanical garden, where we saw one of the rarest trees in the world, a wollemi pine, and acres and acres of amazing gardens and botanical specimens.  However, let me just show you the scale of what I'm talking about.  [NOTE BENE:  Walter's wing span is six feet six inches.  There is no photoshopping involved to stretch the scale of the girth of this Moreton Bay fig tree.  Yes, I said fig tree) 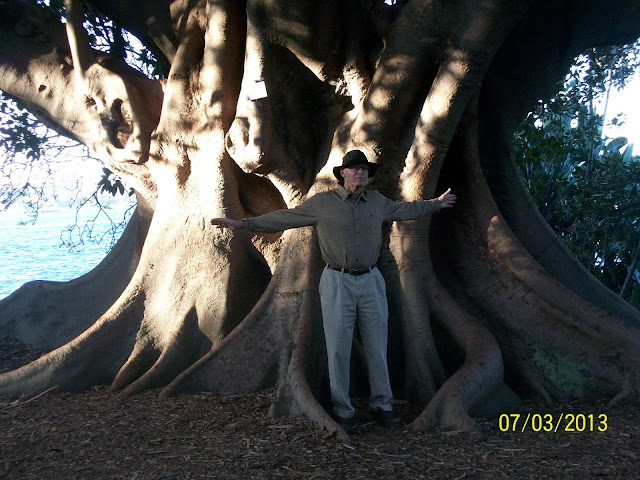 Day 3--In awe and almost forgot to take pictures.  Missed the ancient fig tree in the botanical garden and the sunset over the Harbor Bay from our 31st floor room.  Luckily, WB was on the ball and captured the Sydney Opera House. 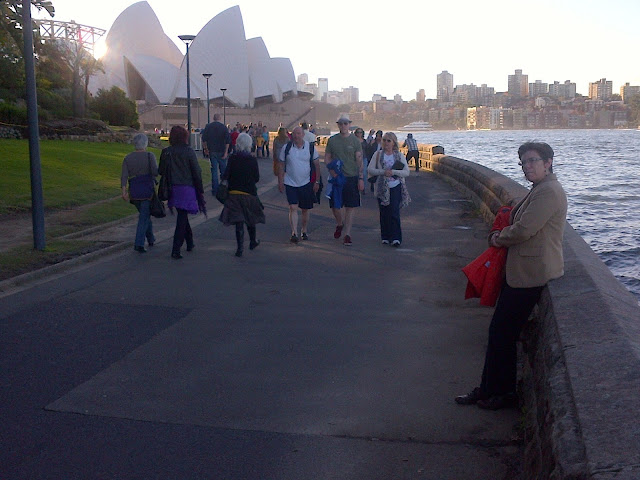 Day 4--Today we visited Manly, a beach town accessible by ferry and named by Captain Arthur Phillips because the indigenous people discovered there were such fine physical specimens.  It is "Seven miles from Sydney and a thousand miles from care." 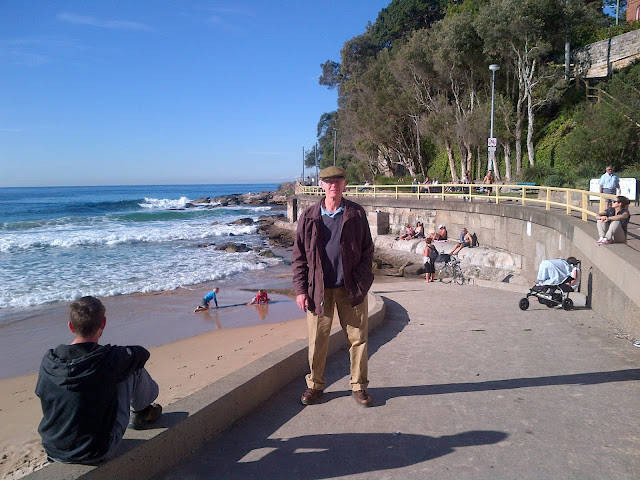 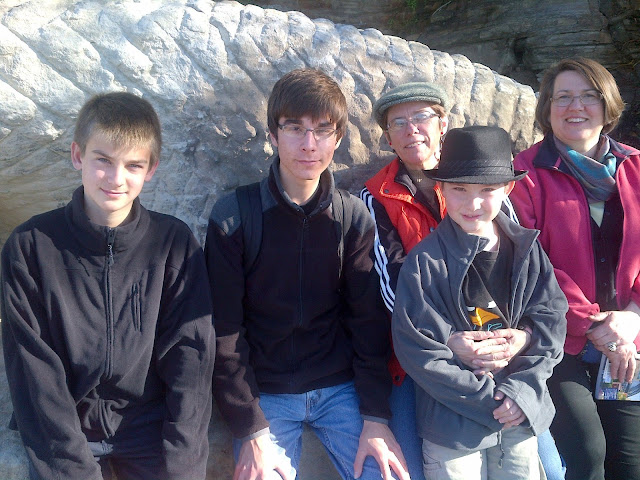