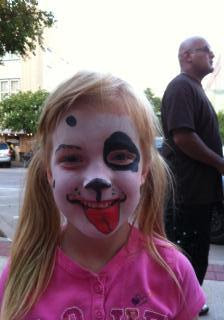 But she is as awesome as she looks.  Check out how well she entertained Davis when he got bored at Christmas, even when she was already dressed for the ball (except her glass slippers): 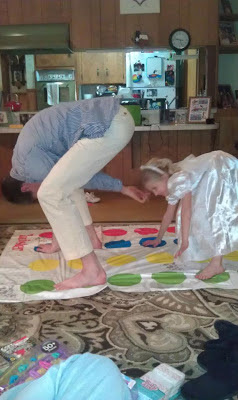 She just had a birthday. . . the one that looks like infinity if you lay it over on its side:  "8"

I sent her what I would have wanted for my eighth birthday.  If you don't know Bad Kitty you are missing.all.the.fun. 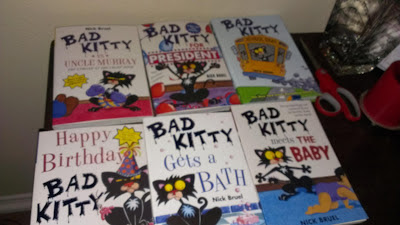 She also got a special trip to Great Wolf Lodge with her friend Sammie.  Don't you wish the place where you spent your birthday looked this much fun? 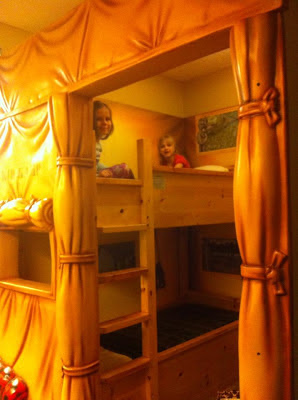 Last time Emma visited me she wrote me some books.  The first one was called "Canser."  It was dedicated to a lot of people, including me and Uncle HaHa (which is what she calls Walter).  It went like this:

The next page had the title "Lucky" with the picture of a person in a wheelchair, saying "Yay" and a doctor saying "Cured."

After that came the page titled "Not Lucky."  I'll let you imagine what the picture looked like.

I'm thinking of making copies and sending it to my Congressman and Senators who are on recess right now instead of working in DC on the sequester.  Have you heard what will happen if the sequester goes through?  Research that funds most of the childhood cancer research in the country will be cut automatically by 8%.  Do you know how much 8% is?  Our friends at Ph.D. Comics explain:

Walter and I drove to Coryell County on Saturday to attend the burial and funeral of a friend's mother.  Yes, I said that in the right order.  First time for me, but it worked pretty well.  We met at the cemetery in the late morning, took care of business there, had lunch with friends and family, and then went to the funeral.

I heard the land for the cemetery had been donated by the family patriarch and by the size of the family monument, I have no reason to question that.  The real question arises around the story that accompanied the telling--that the patriarch, only 24 at the time and living in New York, had won a big poker game and the pot had included a homestead and land in Coryell County.  So he moved, eventually married, and ultimately had a family, some of whom I now know.

It could be true.

What's also true is that this is the fifth funeral Walter has been to in the last three months.  He is almost the tip of the spear in his family--only his mother's youngest brother and his wife remain of that generation.  When Uncle Paulie died last week, I told Davis that dad was going to do pallbearer duty yet again.  This concerned Davis and made him worry out loud about how Walter was taking it.

I told Davis that I never expected to get to the point in my life that I actually had to add a monthly budget category to the family finances for funeral flowers, memorials, and out-of-town travel to funeral services.  Yet, given the expense of flower arrangements, our desire to be generous in our memorial gifts, the overall cost of travel, and the regularity of our involvement, this has become a reality and a necessity.

What is also true, is that during those same three months, over eight hundred children with cancer have died.  Many of them we knew or knew of.  Just outside that three month window was our extremely special friend Hans.  We don't often actually make it to those funerals and memorials--too hard in too many ways, but we budget in the same way we do for our friends and family in the next generation that are moving on to their great rest.  We make memorial contributions to some of the finest organizations that fund childhood cancer research--Children's Neuroblastoma Cancer Foundation, Alex's Lemonade Stand Foundation, St, Baldrick's, Touch-A-Truck, Cure Me I'm Irish, MaxCure--to many really to try and list.

Truth the tell, with all of them, but especially the children, I sure would rather budget for birthday gifts than funeral memorials.