I spent a good part of the day yesterday traveling home from Philadelphia, and I haven't been around quite as many (understandably) excitable people in a very long time.  I am thinking of all my friend and colleagues in the northeast.  It is impossible to list everyone I am concerned about.  I have found myself spending a bit too much time refreshing my weather.com and nytimes.com tabs to make sure I'm not missing anything.

I little while ago, I found this time lapsed webcam on Weather Underground.  It is located oceanside in Ocean City, MD.  This is a "current" video, showing the last 24 hours from this moment. I have embedded it into this webpage, and it will always show the last 24 hours from the current time.  It is definitely getting rainier and choppier over the last 24, not to mention much higher tide.  I'm not sure why I find this live video of the coming storm so compelling.

What does it say about someone when she struggles to wrap up her workday, crossing every t and dotting every i, rushes to the gym to beat the 5:00 traffic and fit the workout in between work and dinner prep, strips down to skivvies, and opens her gym bag to find her socks, shoes, and gym book, but no workout clothes?

It is a very sad feeling to put your clothes back on without breaking a sweat and return your still-folded towel to the young towel jockey.

On my way to Philadelphia tomorrow and hoping that the perfect storm of Hurricane Sandy combined with the winter front moving down from Canada doesn't block my way home on Sunday as effectively as I blocked my own attempt to workout this afternoon.

And while we are at it, what IS the point of dog ownership?

I have three dogs.  They were never completely free-range dogs, but for many years they enjoyed various forms of freedom--sniffing the bushes while their human companion stood to the side pondering  her own thoughts and dreams, snoozing in the sun-dappled spaces of the back yard while she pulled weeds, loping across the dam and through the uninhabited parts of the lake property knowing that she was trailing in their wake.  I've (mostly) enjoyed freewheeling with them on their adventures.

That has all changed.

I still have three dogs.  I would still enjoy a little roving.  That option is currently off the table,

Uma has been under hospice watch since May.  She doesn't wander much because she can barely walk.  She is on a massive twice daily dose of diuretic to help with her congestive heart failure and the fluid build up from her hemangiosarcoma, which means she drinks like a sailor and pees like a fire hose.  Consequently, she spends a lot of time alone in the bathroom where her leakiness does less harm.

Willie did something unspeakably bad in the neighborhood last week and is under strict house arrest and can only venture outside with a guard and shackles (leash).

Teddy injured her back on Monday or Tuesday.  Her vet insists on crate confinement until she heals.

So, if you can't stride across the landscape in October with your dogs darting about and bringing you back news of fragrant bunnies and loamy adventure possibilities, what is the point of dog ownership?
at 10:13 AM 3 comments:

When was the last time you heard someone tell a joke?  Think before you answer.

I'm not talking about someone forwarding you something funny on email, or posting a gag or pithy meme on FB, or about re-telling something they saw on YouTube or The Daily Show.  I mean, when was the last time someone at a party or in the break room or at dinner actually told a joke that required a set up and that ended in a punchline?

A little over a month ago, I ask myself this question and started listening for the answer.  I'm pretty sure I haven't heard a single one in all that time.  How about you?

I know that not everyone likes to tell tell jokes, or frankly, are even capable of it.  I can't do regional (except the one I was born into, which qualifies me to tell Honey Boo Boo Child jokes, but not much else) or ethnic accents, so a whole range of potential jokes are pretty much off limits to me.  There is really nothing worse than setting up a joke that depends on you re-creating a French accent and when you tell it you sound Russian.

Some people don't tell jokes because they can't remember them.  Walter falls in that category.  He appreciates a good joke, but has not set aside any brain space to store and later access joke.  Once upon a time he had two jokes he could remember and tell:  one was about economists and the other was about politics (aren't academics fun?).  He doesn't tell them any more.

I can remember first thinking about humor.  As an early reader, first grade maybe, I would follow my mom around the house reading from my Bennett Cerf riddle book.  It had the added value of being a pop up book, so I had to lift a flap or turn a wheel, or otherwise manipulate the page to reveal the answer.  I think I was in heaven.  Anyway, you can't tell me she didn't get positively sick and tired of hearing little Vickie read:  "What happens when a duck flies backwards?  He probably has a nasty quack up." and "What do you give an 800 pound gorilla?  Anything he wants."

[NOTE BENE:  I later paid handsomely for torturing my mother by giving birth to a child who delighted in the same habit.  Unfortunately for me, Erin had a riddle God-father who bought every one of Bennett Cerf's riddle books plus several others, so for those early elementary years, she was NEVER at a loss for a good riddle or pun.]

I still remember some jokes I learned in junior high, including a couple that I didn't understand on first (or later) hearing, which did not keep me from telling them over and over again.  Other people obviously understood the (probably) raunchy punchlines better than me as evidenced by their loud and long laugh.

In high school, I happened on Isaac Asimov's Treasury of Humor, which had the multiple bonuses of having 640 jokes, instructions on how to tell them, plus a fairly lengthy exposition on the theory of humor.  Wow, did that ever feed my habit!

We've made it pretty deep into the 21st century.  We have a whole network on television devoted to comedy, several satellite radio stations with joke telling twenty-four hours a day, and stand up comedians of every stripe.  More jokes come across my facebook feed in a day than I used to hear in a month (year?).  I laugh at something I read or hear or watch every day. I heard Pete Dominic interviewing a professor on the radio yesterday.  She was Dr. Alison Dagnes, and she was talking about her new book A Conservative Walks into a Bar which goes Asimov one better, exploring the history of satire, the comedy profession, and the nature of satire itself to examine why there is an ideological imbalance in political humor and it explores the consequences of this disparity.

Despite the proliferation of comedy, humor, and joke opportunities, I'm starting to feel sad.  Jokes have become something best left to the professional.  It's almost like "Here's a good one, but Don't try this at home!"

I miss the amateur jokesters.  Will someone tell me a joke?

That said, Nico and all his friends (combined with his mom and my friends) overran the house weekend before last.  It's not so much that they had overwhelming numbers (although there were a lot of them), but they just took up so much more space than they did as younger kids. 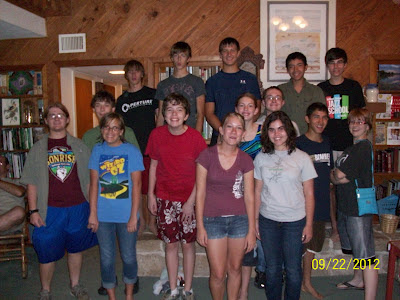 I gave them a camera and ask them to do a little photo journalism of the evening: 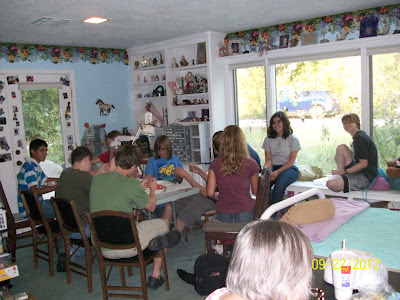 They were pretty serious about getting the lanyards done. 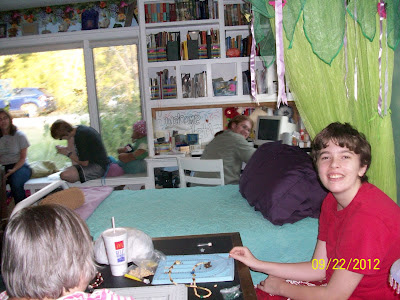 And used whatever space they could find. 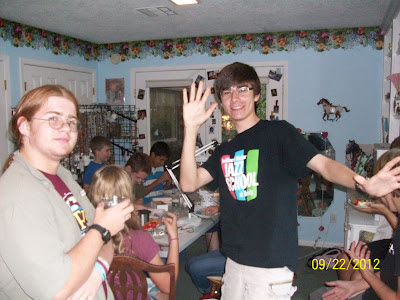 Rowan and Nico finished early, leaving their hands free.  Can you tell Nico has some keyboard-compatible hands?  And can you believe that Rowan, one of Erin's sixth grade classmates, is graduating this year?  He's on the expedited plan! 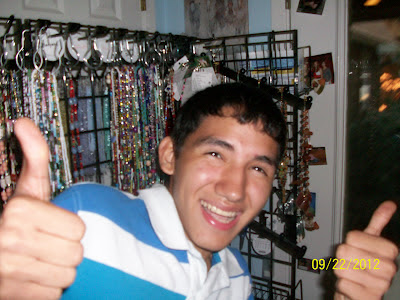 Andy always seems happy where ever he is.  He and Erin agreed about almost everything, except politics. 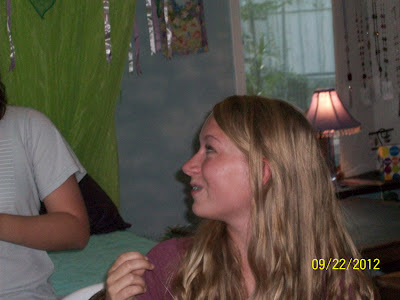 Precious Toni makes the most beautiful, delicate lanyards.  She and Erin have been friends since Day 2 (birthdays two days apart!) 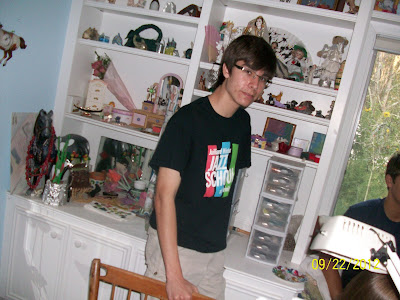 Nico was sure we had shrunk everything in Erin's room since he moved.  It all seemed much smaller now that he is so tall. 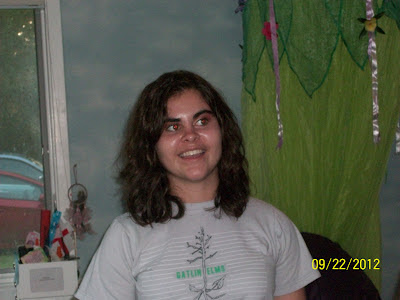 Samantha and Erin had so much in common:  soccer, brains, and most notably, confidence. 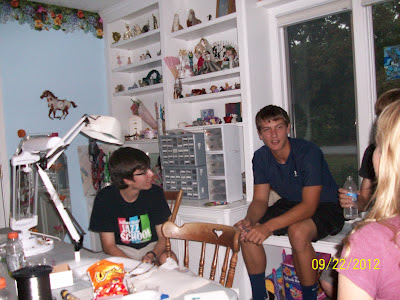 Jackson was always much bigger than Erin, and the trend shows no sign of slacking off. 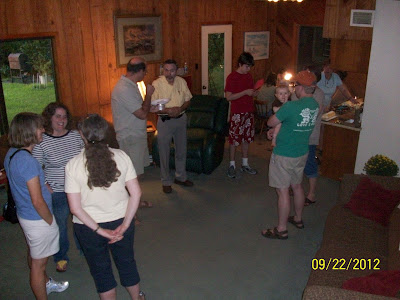 Most of the adults were slackers, preferring to eat and chat rather than work.  This includes me. 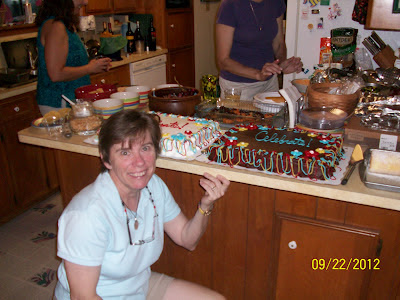 It was my birthday, so I took the evening off.  That means I'm still working on finishing some of the lanyards the kids made, plus the tray full I have from the MacArthur workshop and the one at the new College Station High School last Saturday morning. 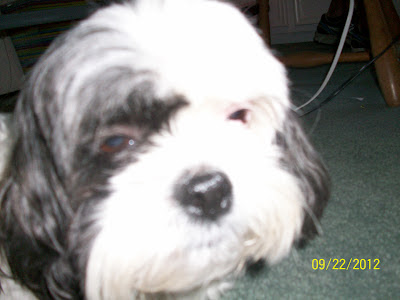 Teddy wasn't really all that impressed with having a house full of teens.

Not only did Erin and Nico's friends overflow their allotted space (plus the kitchen, plus the lake, plus my bedroom where I keep the Wii), they overflowed the love in my heart.