To paraphrase Lloyd Bridges, "Looks like I pick the wrong day to shower before walking the dogs."


Teddy, whom might more accurately answer to Ted-roll, discovered a renegade pony out on Charlotte Lane this morning.  Or perhaps I should re-phrase:  she discovered evidence of a renegade pony.  And took it as her obligation to roll vigorously in the evidence.   Don't you just love the smell of pony poop in the morning?  Nothing like it.


Nothing like it, that is, unless you can find skunk.


Which is what Willie did about fifteen minutes after the pony poop incident.


And where was my stashed supply of tomato juice that I keep for just such emergencies?  Sadly depleted.


So, I had to use tomato paste, of which I had copious amounts.


The tomato paste actually worked pretty well.  A lot like Prell.  A little goes a long way.  Of course, I didn't know that right away and plopped a big old tablespoon of tomato paste right on the top of his head and lathered it in.  I eventually covered him with about a half a can, which made him look like he had tried the mud bath at the "Red Clay of Georgia Spa."  Gradually, it started to cover up (absorb?) his manly, skunk odor.


I added some water from the hose to scrub the paste in and spread it around.  That's when he gave a mighty dog shake and then another and then another.  The carport and deck looked like a terrible crime scene.  I knew that NCIS's Abby Sciuto would need all her forensic skills to de-code the splatter pattern and explain what happened.


Oh well.  I just followed the directions on the can (you know, "Wet. Lather. Rinse. Shake. Repeat.").  Now Willie is waiting in shame on the back porch, hoping to come back inside before the temps reach triple digits (and secretly hoping he can retain at least some of the cool smell he acquired this morning).


I'm headed upstairs for my second shower of the morning.


I know that "Little Shop of Horrors" isn't a verb and, in fact, contains no verbs.  I still need to tell you about our most recent plague (Is this number nine?). 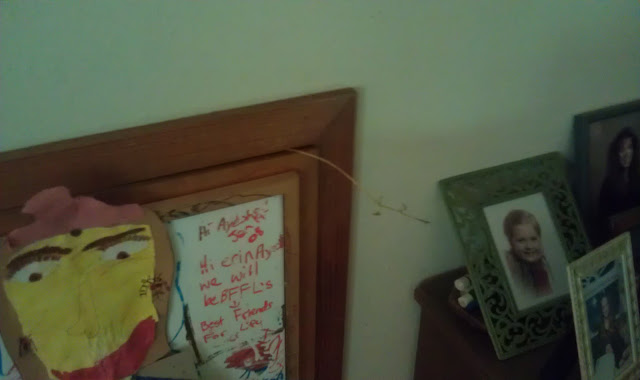 This is more than just an off-centered photo of our loft closet door that still has Erin-made art work on it and the scribblings of Erin and Ayesha pledging that they will be BFFL's.  Note the inexpert camera work of the vine sending its tendrils out in the very center of the picture.


I found this last week when I went to this closet to drag out the canister vacuum that I store there.  Yes, I had a Virginia creeper vine growing out of the loft closet ON THE SECOND STORY of my home.  It originated in the flower bed OUTSIDE the house AT GROUND LEVEL.


Inside the closet--alive and growing: 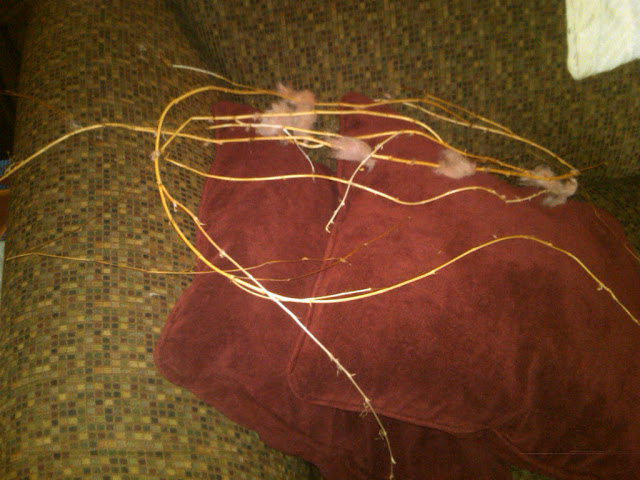 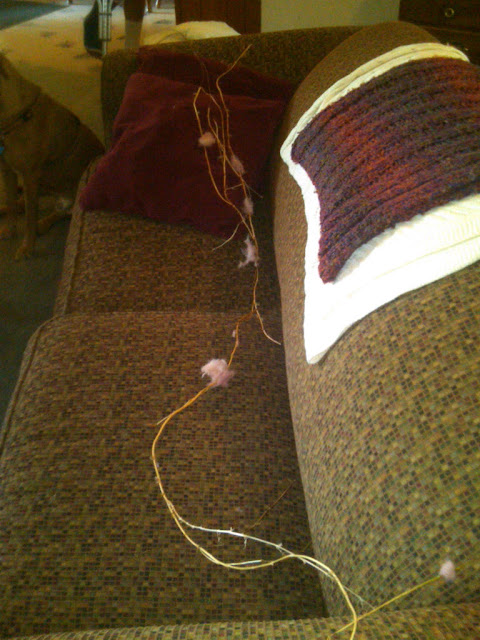 Notice how long it is?  Notice that it has insulation stuck to it where it grew through the wall?


I want you to understand, that it is NOT the case that I rarely vacuum my house.  I usually use the upright, which I keep downstairs in a different closet (which for the record doesn't have Virginia creeper, or yaupon, or grapevine, or any other indigenous species of vine or shrub growing out of it and it better stay that way)!


I suspect that at least one of these two girls who celebrated almost all their birthdays together (Toni on Monday this week and Erin on Wednesday) would find my Little Shop of Horrors a riotous birthday present rather than a plague. 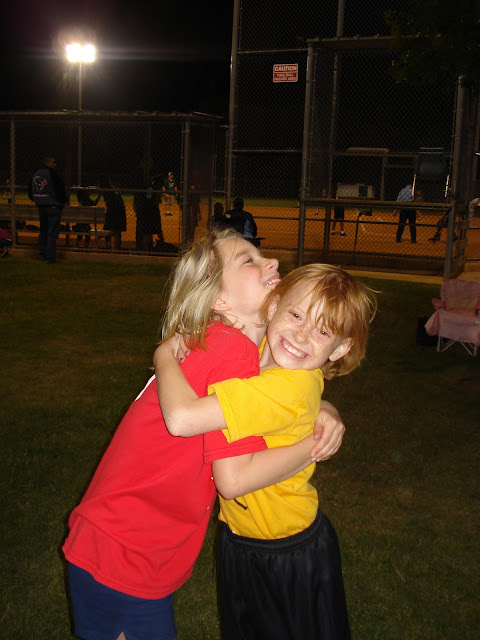 Hair for All Occasions


The first Davis Visit post.  It's all about the hair.


This is the hair that Davis arrived with last week: 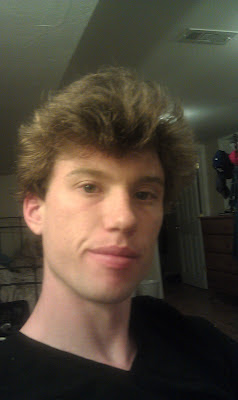 He asked Jamie (our family stylist) for a "Mario Gomez" with a twist.  I'm thinking she probably didn't immediately call to mind the German striker, so he brought a pic along. 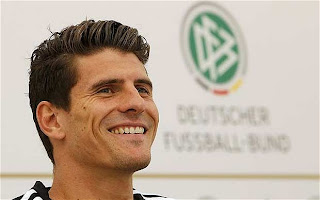 The twist he requested was versatility.  He wanted a hair cut for "Saturday Night:" 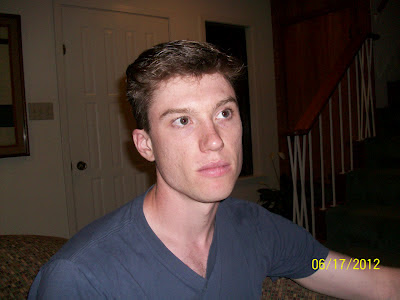 That with a part and some taming he could turn into a "Sunday Morning:" 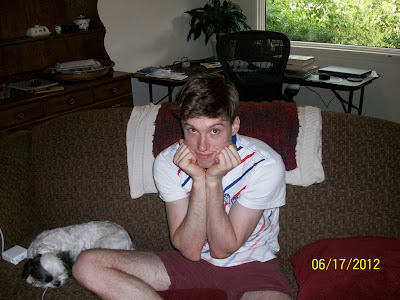 I think he got the idea from Willie, who has very versatile ears: 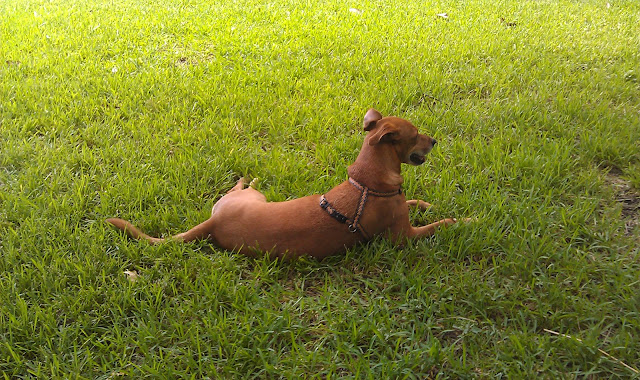 
It hasn't been "lions and tigers and bears, oh my" around here.  More like the first several chapters of the Ten Plagues of Egypt.  We started out the spring with more buffalo gnats than we could possible use in a lifetime, then churned, in sequence, through similar inundations of scorpions (tag, I'm it!), spiders (which have generated a persistent cobweb disaster in my not-sealed-very tightly country home), orange dog caterpillars, flying ants, flies (blow, bottle, house), and now, according to the local paper, we should brace for crickets. 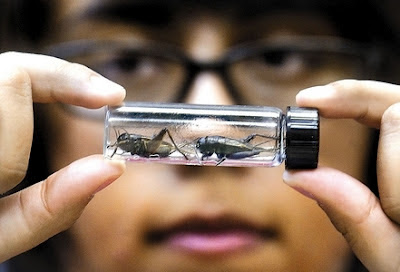 What might follow?  I think I saw the sign of the seventh plague last night:  fast-forming thunderstorms with shifting, high velocity winds and other unpredictable weather patterns.

Davis's already long day (Columbus --> Newark --> Dallas --> College Station) grew by multiple hours  once he landed in Dallas.  He watched his departure time slip further and further into the evening; he boarded, unloaded, and re-boarded his Embraer RJ145, possibly multiple times.  He eventually took off on his final 45-minute leg merely three and a half hours behind schedule only to learn he had chosen the shake and shimmy setting on his aircraft.  None of that mattered quite as much as the repeat attempts to stick the landing at Easterwood Airport (each re-try banked him back up to circle the airport and stare wistfully out the window towards our house--an increasingly impossible goal to reach).

Here he is this morning (notice that his hair-raising flight had long-lasting effect), trying to come to terms with living through the Seventh Plague! 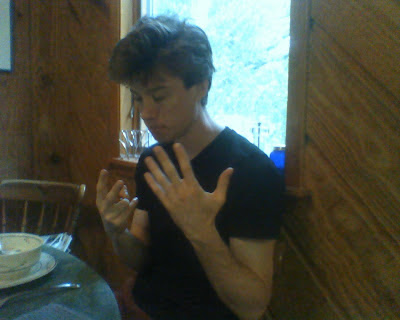 
Maximillian had his second post op visit last Friday (and no complaining from the peanut gallery about my slow update).  We were pretty sure he was healing and suspected they would pop him back into another cast after he had his x-ray.  We didn't actually guess that they would put him back in a cast and tell him they would take another look in three weeks.


Here's a shot of three of five of the healing incisions on the Frankenstein foot (with the swelling, he now has a regular width foot.). 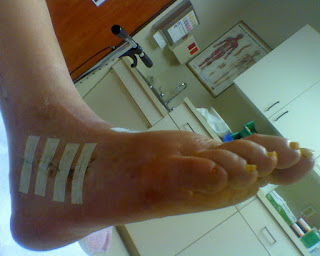 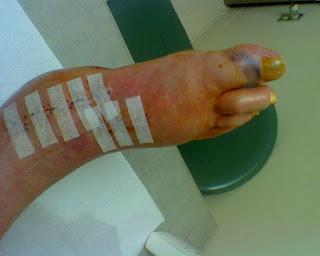 Do you think he has a chance as a foot model?  I guess it depends on whether you need a "before" or  an "after" photo.

Here's the view from the inside.  The long piece by the heel is a bolt. 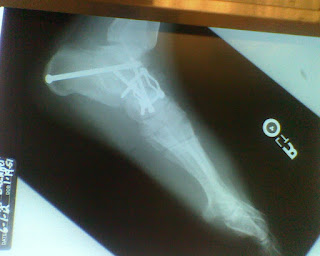 The next shot has the same foot twice.  You can see the staples and multiple screws.  I don't think I have a shot with the wedge, and the putty doesn't show up on x-ray. 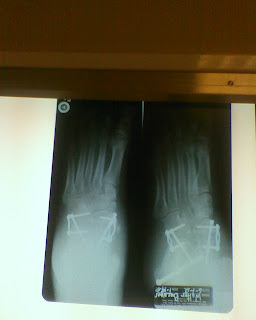 In the meantime, I've been jet setting it and am still in DC trying to do all the good.  We had a very productive Project Collaborate meeting on Sunday and have some real meat on our efforts.  I even fit in a visit to my Congressman's office along with many productive conversations with various childhood cancer advocates.

Now, I'm trying to use my superhero powers to keep the Spurs ahead of OKC while live-chatting with Davis.

I'll be home tomorrow to relieve the Eagle Scout who has been walking the doggies and helping Walter get down to the dock and back for his rowing.