Many of you know that I spent the first half of the year working on increasing my arm length by operating Camp Mimi, a Special Long-Term Residential Camp for Incorrigible But Exceedingly Handsome and Lovable Beagles.


Now that my left arm (A.K.A. retractable leashing holding arm) is sufficiently stretched so that I can easily retrieve crystal from the top shelf of any cabinet while standing flatfooted, I have had to bid adieu to my special guest, Lyndon, my grandBeagle.  Here he is right before the final boarding call for his drive to Ohio. 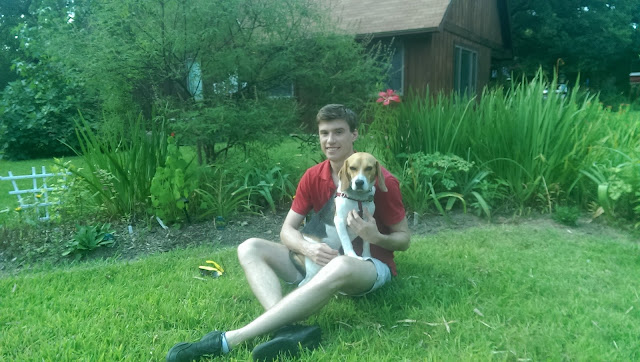 Over the six months he stayed with us, we experienced many mirthful moments, many of which I am not quite prepared to relate, lest I trigger some of my latent PTSD symptoms.

The only story I actually feel comfortable telling is about our multiple games of rock, paper, and scissors every day. In this version of the game, Willie is the Rock.  Lyndon is Scissors.  And Teddy is Paper.  The game might play out in terms of urine marking, where Rock would cover Scissors; Scissors would cover Paper; and Paper would cover Rock.  (Can you imagine how slow it is walking three dogs who have to drip a bit of pee on every novel smell or sign of intruder?)

It is also played as a roughhousing game.  In any game of woof and chase, Willie would dominate Lyndon, Lyndon (would try to) dominate Teddy, and of course, Willie lays on his back, so that Teddy can dominate him.  Here they are between rounds: 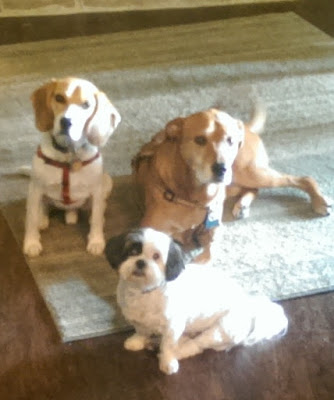 Teddy actually has the power to be dynamite in rock, paper, scissors, but she tried mightily not to play that way unless she truly had to.

Of course, the truth is that we all miss Lyndon now that he has returned to Ohio.  And Davis has set up his bed so that Lyndon can keep up the squirrel and bunny watch, just like he did here: 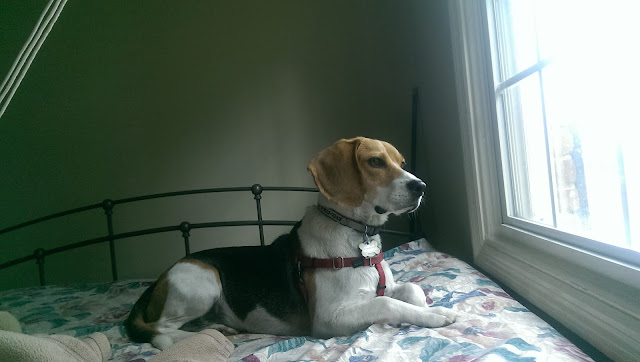