Davis picked out a gift for his dad and chose express shipping.  Thanks to the efficiencies of modern logistics management, his gift is seeing more of the country than many of my students have seen in their lives:

Can you locate Bryan on the map?  Draw a triangle between Houston, Dallas and San Antonio and look for a spot somewhere around the middle of the triangle.  You might think it could get here eventually.  BUT, considering that--with one exception-- it can't seem to get more than a couple of hours down the road on any particular day, you might think it could be another three days before it arrives.  That is, unless you know, as most Texans do, that you really can't get from Texarkana to Bryan by any direct route. 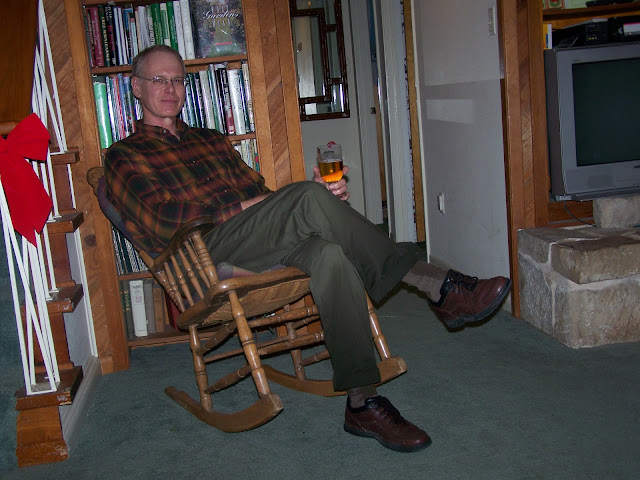 Walter grew up think that his birthday was a holiday.  Fort Stockton schools dismissed for Robert E. Lee's and Jefferson Davis's birthday, which happened to beWLB's birthday as well (Unfortunately, in 1973, the Texas legislature combine the previously official state holidays honoring those two specific men, who Walter didn't mind sharing a birthday with, into a single "Confederate Heroes Day."  At that point he may have either started claiming birthdays with Edgar Allen Poe, or perhaps only mentioned it in the years when the 19th fell on Martin Luther King, Jr. Day.).

For some reason, Walter doesn't end up in too many photos.  I really like the one I opened with because Walter looks so relaxed, but also very wise.  It also shows the rocker that has been in the family for generations.

Erin talked him into this birthday pic a few years ago.  I think his birthday must have coincided with MLK Day that year, which would explain how Ayesha ended up visiting (probably a three day weekend!)

Tonight will definitely be quieter when Walter and I celebrate his birthday than it ever was when Erin was in charge of the party, but we will have a lovely and loving time nevertheless.
at 5:17 PM 6 comments:


Classify this under first world problems.


Walter and I like cabbage, both as slaw and steamed.  With the right kind of prep, we could probably eat a whole head of cabbage over a few meals if we made it into slaw.  But.  Those store-bought bags of shredded cabbage with both purple and green varieties and some bits of carrot added for color are a lot easier than starting from scratch with a head of cabbage.


So, usually when we have a head of cabbage we slice and steam it.  Except.


There is no way we can eat a whole head of steamed cabbage.  Even on our healthiest days.  So, I usually take out my biggest chopper, slice it, steam half, and return the other half to the refrigerator to mildew until I can lug it out to the compost pile.  Not that I intend this.  It just happens every time.  I'm usually not in the mood for steamed cabbage two nights in a row.  Somehow, the half a head gets pushed to the side and forgotten.  It wouldn't be that hard to cook it all at once, but I could never figure out a way to use leftover cabbage (and perhaps I am always a little too pleased with myself for cooking with cabbage in the first place, and as a side note, that part of the joy of cooking cabbage is that it allows me to call to mind the Cosby Show episode when Clair Huxtable was turning 46 and the kids put on a show that featured among other things the price of a head of cabbage at various points in her life).  Thus I keep buying cabbage, and thus I keep throwing half of it away.

To crack this puzzle, I finally consulted the inestimable James Beard's American Cookery and found a very cool recipe that completely eliminates the problem of what to do if you can't eat a whole cabbage in one sitting.  Ladies Cabbage.

"Ladies cabbage must have been a very fashionable dish, for it appears in recipes by everyone from Mrs. Harland to Mrs. Rorer.  Strange how certain dishes have a vogue for years and years and suddenly disappear.  No one hears of ladies cabbage nowadays."

Let's just suffice it to say that if you add enough butter, cream, and eggs to chopped up, leftover cabbage, you will never worry about buying more cabbage than you can eat.  You might even decide two heads are better than one.