Davis found a new answer to the question "What's in Your Wallet?" yet somehow the answer gives rise to other questions, like "Why is your wallet so large?" and "Would that pass through airport security?" and "How can you ever find shoes to match?" 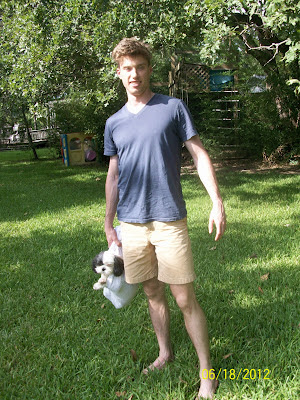 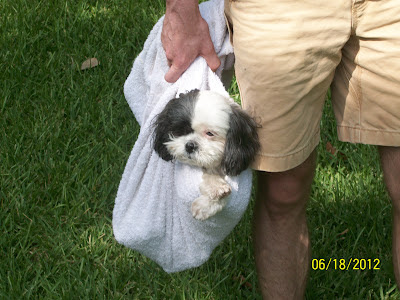 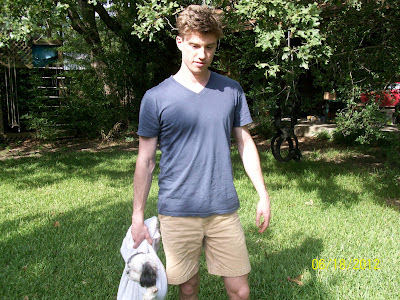 
Prepare to be wowed!


We often depend heavily on Davis when he comes for a visit.  Not that we're enfeebled or anything like that, but I think there is an American (perhaps worldwide) tradition of celebrating an anticipated homecoming of a grown child by having some (not too many) undone chores waiting.  (NOTE BENE:  if this tradition doesn't exist, it should).


Davis has always cheerfully complied--changing hard-to-reach light bulbs, planting waiting shrubs, and on several occasions washing and staining the deck and porch.  We (in this case, Davis and I) have been working on a plan for him to pave the backyard slab with festive brickwork, but with just a week in town, we didn't get to that this time.


Instead we tackled the shed--built in 1994.  And since the move-in that summer, many things have gone in but few have come back out.  Did I mention this is Walter's shed?  Did I mention that despite much lobbying for at least a decade, it has never been cleaned or even really tidied up since the day we moved in?  Here's a visual tour (I'm thinking these photos could be the basis for The Ultimate I Spy Hidden Object book:  20-pack of Coors Light, manual sheep shears, hummingbird feeder, kayak caddy): 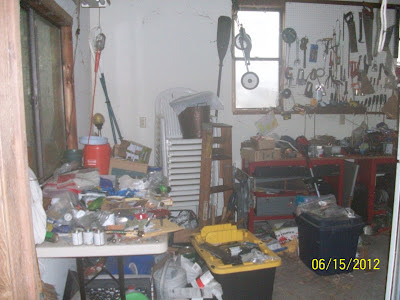 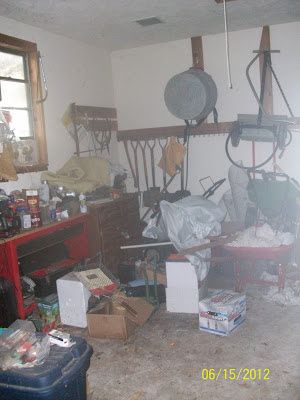 Of course, the first step was to pull everything out.  We grouped like with like as we worked and hoped that Walter would wheel out at some point and give us at least tacit permission to throw some things away.  You can see in the upper left corner of the first photo below that we set up a comfy seat for him to make his pronouncements from (it remained empty, save to hold the laptop so we could listen to pandora while we worked). 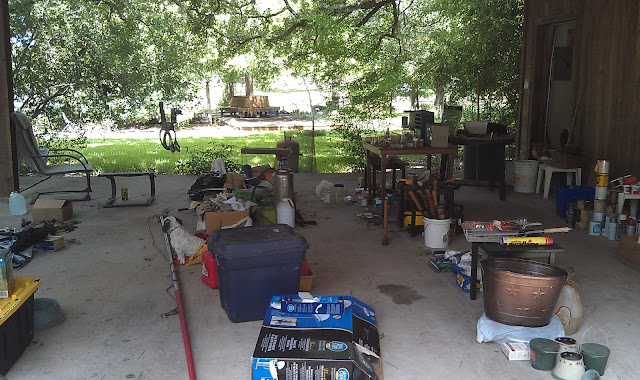 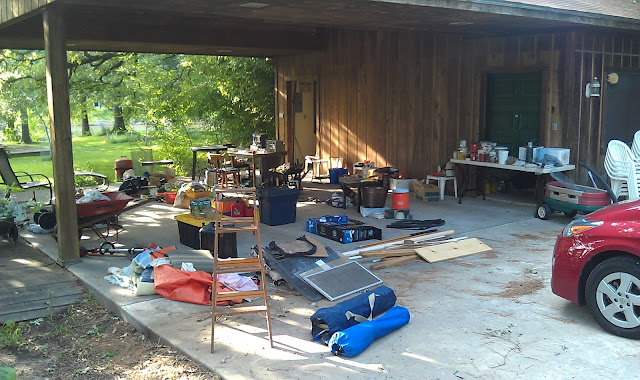 After we got it all out and did some heavy-duty cleaning (and, unfortunately, spilling almost a quart of oil that a random rodent had gnawed a hole in.  NOTE BENE:  there are many great sources and an equal number of not-so-great sources of information on the internet about what to do when you spill a quart of oil on your shop floor), we were none too certain it would go back in and look any different than it had before.

As you probably know (through observation of others, not through your own personal experience), once an organizing system gets out of control, it's easier to buy a "new thing" that you need rather than spend time looking for the one you already own that's "in there some place."  Plus you run out of time, so when you finish the project you toss the "new thing" in the shed with a promise to put it away in the "right" place when you have the time.  That is how you might end up with multiple versions of the same needle-nosed pliers, paint accoutrements, or sprinkler parts.


This is especially true on items like nuts and bolts and other kinds of fasteners, which were strewn about in yogurt cups, Texmati rice containers, pill bottles, and every flat surface in the shed.  Davis and his friend Sam took the time to do fine-grain sorting and build a maintainable system to store and later locate these items: 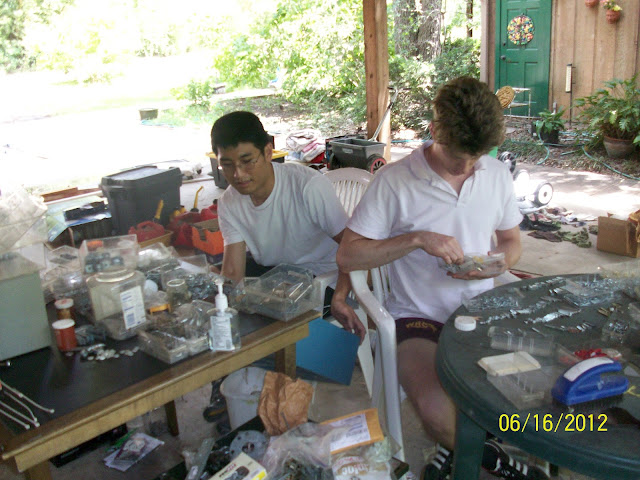 This was not quick work.  But it yielded good results.  You can't really tell, but the nuts in the drawers on the top row are sorted (and labeled) by size in each drawer and by types in sections within each drawer that Davis fabricated out of corrugated plastic, AND they match to the bolts in the drawer directly underneath which are also sort by size, type, and length. 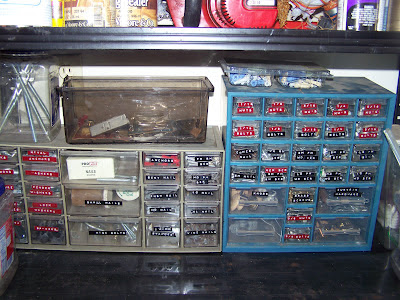 And in case you are wondering, we freecycled, recycled, and shared quite a lot that we took out of the shed (with Walter's blessing, no less).  I think Davis and I were hoping to thin things out by 5-10%, and we may have hit 15-18%. 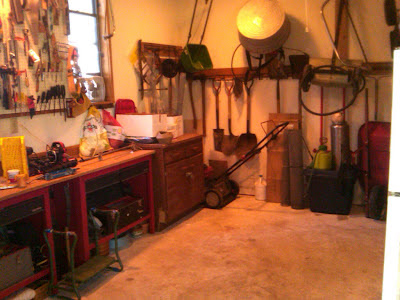 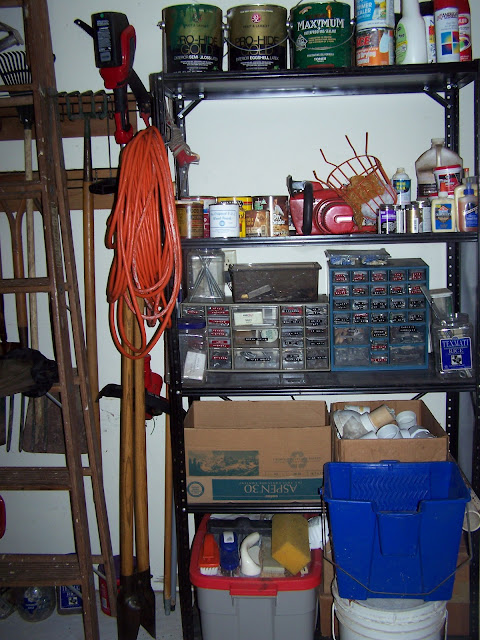 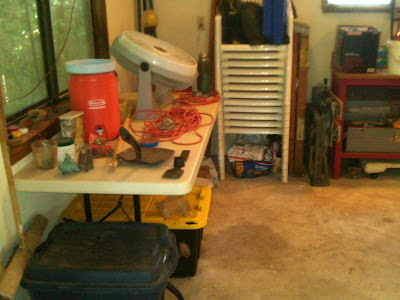 We (Davis and I) thought the things on the table were throw-away-able, but this is the stack that Walter is going to work on and fix.  And if that doesn't materialize, at least we will have a pictorial record and know for sure when we have reached the bottom layer next time we have to excavate the shed.

Maximillian got clearance to head back to the pool this week.  We didn't actually have the opportunity to practice the approach logistics repeatedly and to perfection like we did with rowing, but we had a theoretically sound plan and we did cover the details to the nth degree.  This included two separate store runs to find the appropriate swim sock.  Who knew you had to choose the correct psi (Pounds per Square Inch) when buying compression socks?  Probably everyone but me. 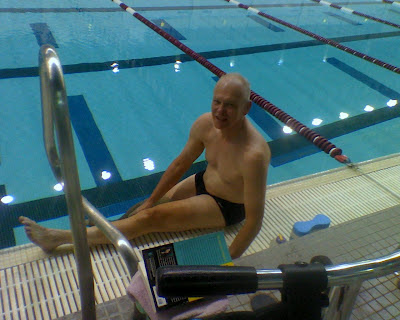 Everything worked out, and his sock did not absorb enough water to sink him.   Here is proof--the last five seconds of a fifty-five minute swim:


He swam for 55 minutes on Monday, Wednesday, and Friday, bringing a much needed change of pace to his daily exercise routine.  Really, how many times would you get excited about rowing the circumference of a rapidly shrinking 25 acre lake?  At one lap every twenty-five minutes, three laps per day, seven days per week, I would imagine the scenery would run out of oomph and visual delights fairly quickly.


Even better than the change of scenery was the triumphal return to the TAMU Rec Center. 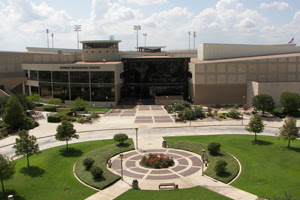 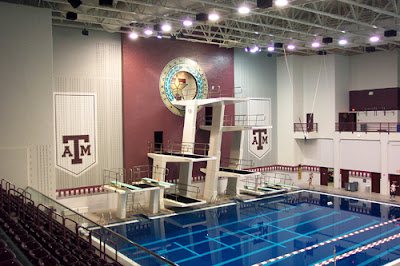 There may not have been antiphonal trumpets, but after eight weeks mothballed at home, Maximillian was happy to get back.  You could tell all his buddies had missed him.  They may not be a talkative bunch and they may barely know each others' names, but they've had neighboring lockers, shared swim lanes, and spotted each other in the weight room for thirty plus years.


By the end of the week, Maximillian began experimenting with partial weight bearing.  He weighed his foot and figured out what about 40 pounds of pressure felt like (stepping on it, not wearing it as a sock).  Now he is working his way up to supporting that much as he walks along.
at 4:22 PM No comments: