This is not a store display.  This is a small section of Erin's room. 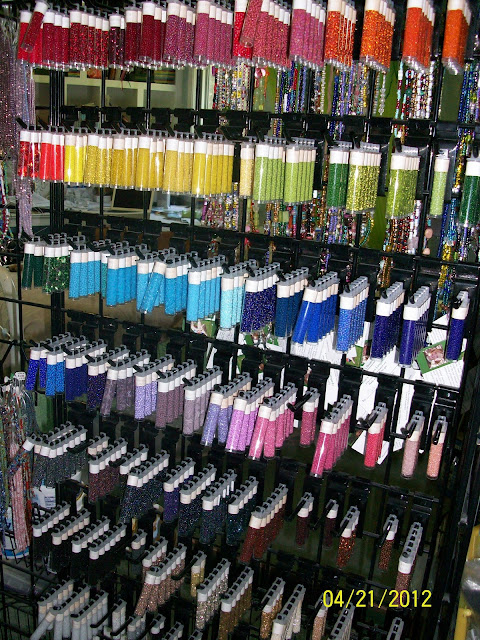 Thanks to my uber organized sister Kat (who would be OCD about organizing, but refuses on the grounds that OCD isn't in alphabetical order), the bulk of the seed beads donated by Jennifer Fountain at the end of last year and sitting in a jumble in a cardboard box since then, are now ready to go for the summer lanyarding season!

Do you feel your creative juices flowing?

Things I learned from reading this week:

According to a report from the Congressional Research Service, there were 294 million guns in the country in 2007, up from 192 million in 1994. More guns might be expected to mean more influence for the N.R.A., except that the number of households with guns has actually declined fairly consistently since 1973. The people who buy guns, it seems, are usually those who already own them.

From The New York Times

Plato was an athlete, particularly skilled as a wrestler. His given name was Aristocles, after his grandfather, but the coach under whom he trained is said to have called him “Plato” — from the Greek for broad, platon, on account of his broad-shouldered frame. It stuck.

State tax codes have a way of accumulating junk -- quirky breaks and carve-outs that grow increasingly odd as they linger on the books, like tacky old legislative souvenirs. In Alabama, you can still deduct $1,000 for building a radioactive fallout shelter. In Arkansas, blind combat veterans may buy a new car every two years tax free. In Hawaii, residents can claim a $3,000 deduction for taking care of "exceptional trees" on their property -- as long as an expert deems them "exceptional."

One of the strangest?  Florida's greenbelt law, which gives significant property tax exemptions for preserving green space areas.  The way to prove you deserve the exemption?  Rent cows for your lot and pay significantly lower taxes.

And these contrasting quotes from the Herding Cats blog


We contrast that with Einstein quote

A quick glance at my bookshelf in the left column reveals some that I have had going for quite a while and a couple recently added reads.  I don't know if you know Wilkie Collins or The Moonstone.  I didn't.  First published in 1868, folks who more in the know than me identify The Moonstone as the first detective novel.  It also has the quirk of telling the story through the eyes of several different characters, over time and in different countries.


I'm in the part told by the house steward, a seventy-something family servant named Betteredge, and given the pithy asides he adds to his storytelling, I would say that I'm not he first to notice that he is aptly named.  He also has the habit of dipping into Robinson Crusoe when confronted with a problem, needing wisdom, or just looking for comfort.  I found that funny and endearing enough to tell the Sunday school class about it on Sunday.  Of course, some people do that with the Bible, which I guess is the point, and also why I brought it up in Sunday.


As soon as I set it up and delivered the part about about Betteredge consulting Robinson Crusoe for divine insight and had worn out eight copies over the years, my good friend Bill jumped in and said,  "My mom did the same thing with The Count of Monte Cristo."  I didn't believe him, but he insisted it was true.  Do you think this is as funny as I do?  I mean, it was funny for a made up eighteenth century servant with little education to consult a work of fiction for sustenance, but I have laughed every time I have thought of an actual 21st century woman dipping into The Count, just like Walter's grandmother relied on The Bible.  I have also added Robinson Crusoe and The Count of Monte Cristo to my future reading list, just to see what the buzz is.


Speaking of grandmothers (that wasn't a very clever segue, was it?), Walter's grandmother not only consulted her Bible, she took it another step.  Apparently, she got a new Bible every year, read it cover to cover, annotating heavily as she went.  At the end of the year, she would put the Bible in a shoebox, tie it up with a ribbon, and stack it in the closet (never to be viewed again).  When she died there were layers of boxes lined up on the shelf in the closet.  His other grandmother (maybe great-grandmother, I will have to check) was a Freethinker (if you don't know what that is, you should look it up).  When Walter's dad went to her to explore the idea that he wanted to be a minister, she listened carefully until he was done, then sent him on with the advice that went something like "Why don't you find honest work?"


My grandmothers were just as different.  I grew up thinking of them as the "cooking" grandmother and the "playing" grandmother.  I think that is a little one-dimensional of me, but I do think, like Walter's grandmothers they represented somewhat distinct points fairly distant from each other on the grandmother continuum.


I can remember my mother's mother loving to play canasta and bridge (I was taught bridge as a ten-year old so she and my mom and my aunt would always have a fourth).  She could keep the conversational ball rolling with anyone.  I have a fixed memory of her stretched out in front of the huge black and white console television, working out with Jack LaLane.  She liked the horse races.  The only thing she could cook that I remember enjoying was "Sock-It-To-Me" cake.  Everything else was a disaster. 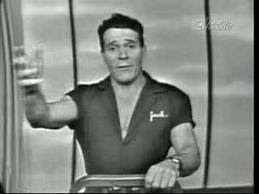 My father's mother was a cleaner, from cleanersville.  When she visited, I had to sleep on sheets and pillowcases that she had starched and ironed.  By the time she left my cheeks were rubbed raw.  The upside to her lengthy visits was that she cooked a full hot lunch every day and we all came home from school and work to eat.  She sewed me so many dresses that when I started first grade I didn't repeat an outfit until October.


When I was young I just thought of them as work v. play, but my "work" grandmother also taught me to play poker and honed my skills until I was pretty scrappy.  She'd fly kites, fish, and work jigsaw puzzles with me--everything was very Vickie-centric. This was different from my other grandmother, who made no real effort to endear herself to me on my terms.  I think she was much more adult-oreinted, and it pleased her to no end when I finally caught on to her bawdy jokes and her clever charm.


In hindsight they were a contrast, just not the contrast I grew up thinking I understood.

Except, of course, when it irritates me.

I have writing on the brain.  I think it's because I have graded non-stop since the week after spring break and see little respite on the horizon.  Not all students write badly, but enough do that I'm tempted to despair.

I constantly seek ways to support students' writing.  I start with the obvious:

I introduce them to the Seven Dwarfs of Bad Writing:

I warn them not to pull a Snow White and set up housekeeping with these bad influences.

I give them general advice and specific guidelines.  I point them to writing experts at the University and in the public domain (for instance, Constance Hale on sentences.  She begins, "I like to imagine a sentence as a boat.").


Mainly, I wonder about their previous writing instruction.


Teaching writing is just not held to the same standards as the other two Rs (readin' and 'rithmatic).


Educators attack the process of teaching reading.  We have multiple methods and a huge number of weapons in our arsenal:  phonics, "look & say," language experience, context clues.  Teaching reading is designed to span the entire range of intrinsic capability and interest.  Once a student can read Hop on Pop, teaching doesn't stop.  Even if most of the class is still "sounding it out," other kids move on to chapter books, literature, and discerning reading (which means you figure out that you don't read the newspaper the same way you read your favorite blog or your chemistry text).

Math is much the same. No one expects everyone to learn in the same way or at the same pace.  Students who master basic operations go on to algebra, geometry, and beyond.  Others get more practice on the basics.  Teachers differentiate the curriculum and there is always more to learn for everyone.

I wonder about writing instruction.  Do instructors meet every student where they are?  Do students who figure out basic sentence structure get channeled into more challenging writing opportunities?  How much effort goes into remediation?  Is there an armada of opportunities to figure out a range of writing skills and strategies?

When I read my students papers, it feels like everyone has had exposure to writing instruction, but at some point (8th grade, maybe?) their writing became frozen in time.  Somebody signals that is good enough (and from my vantage point the bar here is pretty low) and then everyone stops progressing.  So I'm faced with college students and even college graduates who write by formula, who can't discern the appropriate type or style to adopt for any writing opportunity, and who really haven't explored the concept of writing beyond trying to avoid it.  I think that many of my students believe that writing is an innate skill/gift that you either have or you don't, and that if you are a "bad" writer there is no hope and if you are a "good" writer you are a lucky dog and don't need any more instruction.


That drives me crazy.  They are wrong.  They need to learn and then practice what they learn.


For the record, if you work at it, your first draft could should look like this: 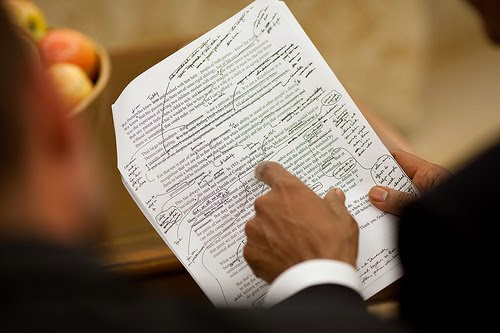