I warned you. The free time flew out the window. I will now try to recall how this whole journaling thing works. I'll begin with three pics, representing some of the costume changes from 11/15: Erin and Jackson, with Ben Franklin (I couldn't convince the girl sitting behind me that this wasn't the original BF); Erin as ball girl, complete with tornado socks (and no, we are not sponsored by a barber shop); Erin and a bevy of Mystics bundled up at the Aggie game. 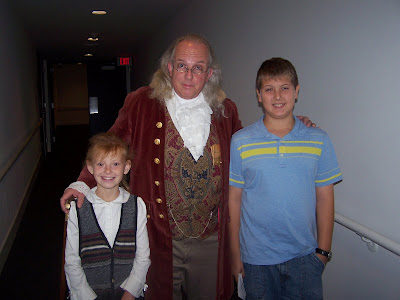 Hard to believe that Jackson and Erin are in the same grade with birthdays only months apart. 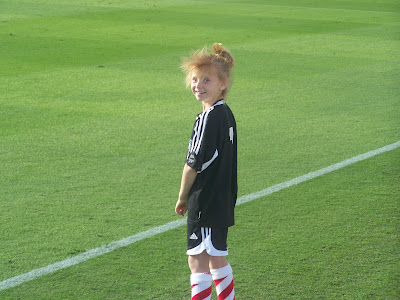 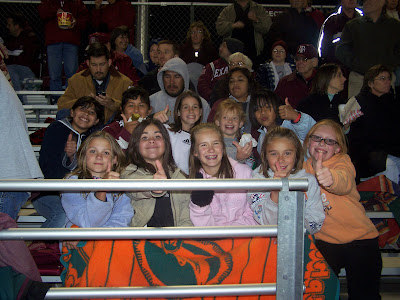 I'm not sure what else to highlight of the last week and a half. Erin's IVIG went off without a hitch, if you don't count the slow start (arrival and scheduled start time: 9:00, actual start time: 11:50, total duration: ten hours). I guess you might say I was out of shape for the treatment world. I used to take ten hour (or longer) days in stride. I would certainly never run out of entertainment items. Last Friday's marathon at St. Joe's found me phoning Elaine at about 3:30, begging her to bring Nico by after his piano lesson because we were still facing another three hours of drip, followed by an hour observation, with not much left to hold Erin's attention.

I do have an unlikely Erin story to report. Erin's teacher asked her, Nico, and Farhan to teach a lesson about government some times in the next couple of weeks. Davis did the same thing when he went to Branch (although as I recall he taught his class about the concept of pi). What would you do if you had to do peer teaching? A little research, probably a poster, maybe a handout? Erin took a different tack. Last Sunday night she wrote her Congressman an email. Here's an excerpt:
By 10:00 the next morning, she had a reply from Chet, and I had a message on my cell phone from his scheduler, Leah Cohen. After a couple of rounds of e-mail exchange between me, the teacher, and Leah, the deal was set. Erin will have her Congressman at her back when she teaches next week.

Since then, we have focused on what the rest of America has had on its play list this week. That's right. . . house cleaning. Partly because I had reports to grade hanging over my head, and partly because I had twenty people planned for Thanksgiving dinner, I spent the bulk of Tuesday cleaning. Much of it was mundane and not worth a mention, but I did clean both refrigerators and all three freezers, consolidating the good and throwing out the bad and ugly. Can you guess how many boxes of rectangular salmon I found niched in various frozen nooks?

If you answered twenty-two boxes, you would win the prize. I felt comforted knowing that if all else failed and we ran out of time to cook the turkey and the giant pork loin we had bought, we could issue each guest a box of rectangular salmon and still have leftovers on Friday.

Having put the cool storage devices in good shape, I ran to Houston (heavy traffic both ways--up hill, but no snow) to pick up Davis and Dillon (look for an update to The Report pretty soon). Since then, the Buengers have had a grand Thanksgiving with much food, relaxation, some games and movies, and of course incessant dish washer loading and unloading. Both Aunt Elisabeth and Aunt Katherine made it to town with their lovely daughters. I wish all of them could have stayed longer, but there is never enough time. Erin doesn't seem to have noticed that the daytime outdoor temperatures have bounced around from 85 to close to 40 over the last couple of days. She has romped it up with the visiting twins Mary Beth and Rachel next door, Clayton Sue from Fort Worth, and Nico, Adam, Samantha, and Pablo. She's made it to the movies twice, around the lake several times, to someone's barn in the country (Can you tell that she's not a first-born? I let her leave for parts unknown, just so that I can grab a couple of hours of unencumbered grading time.), and up and down the road a gazillion times. I have quite a bit more to tell you (along with some decent photos), but in the spirit of balancing grading with blogging, I'll stop now and give you some more later.
at 3:59 PM