With a Chipotle right across the street from Texas Children's Hospital, it seemed like a natural place for us to get takeout when Erin was in-patient as a five year old. To my surprise, she rejected every item from the menu that I brought her, and I had no clue as to why. Later, when she had a more nuanced vocabulary and a more experienced palate, I learned that she detested cilantro. I could accept that, but I didn't really understand it.

This summer I read an explanation that shed light on the subject. The local paper carried a syndicated story from the Baltimore Sun in the Food Section one Wednesday about cilantro, making a bold statement:

"Many people love the herb. Just as many, it seems, hate it. There appears to be no middle ground, and the reason for that just might come down to genetics."

Apparently, people who hate cilantro (did you know there are "I hate cilantro" haikus, t-shirts, and blogs) might have a genetically based inability to smell certain odors, which the body interprets as flavor when food’s involved. The condition is called specific anosmia. To this portion of the population, cilantro smells, and therefore, tastes like soap.

This seemed to explain Erin's aversion to Chipotle, since almost every dish comes with a hefty measure of cilantro. Yet, the solution bothered me. Why? Because I could hardly believe there were any odors that Erin couldn't smell. She had the most enhanced sense of smell I have ever observed.

I live on a private lake in Bryan, Texas. There are twenty lots around the lake and all but a couple have homes with families living in them. One day when Erin had just turned four, she, and my mom, and I were out walking the dogs. We had gone off the road and entered the trail. We spied a nondescript, white handkerchief caught on a yaupon shrub and wondered who it belonged to. My mom and I examined it closely, but could see no sign of ownership or even that it had ever been used. Erin reached for it and sniffed it. "This," she announced, "belongs to Marvin," a retired neighbor up the road. My mom and I looked at it again, maybe expecting to see his initials, but again saw nothing identifying.

Which led me to wonder what Marvin smelled like, because I had never noticed. I took a tentative whiff of the handkerchief, and smelled absolutely nothing. A few minutes later, however, when we showed him the handkerchief, Marvin claimed it as his own.

There are a lot of things parents burst with pride about, but having a child with super odor detection capabilities doesn't usually make anyone's top five list. When kids play superhero on the playground, they don't ordinarily choose smell intensity as their superhero superpower. Why, then, am I bringing this up?

I think she transferred her olfactory powers to me when she died. I used to have run-of-the-mill, if not a poor sense of smell. I didn't really notice bad odors unless they were overpowering. Heck, I live with dogs, who on any particular day might smell like pond scum, bird poop, or manly generic dog scent. If my nose worked well, I would probably throw up whenever I walked in my house.

Some time after Erin died, I started noticing smells I hadn't noticed before. One night I detected a whiff of peach on Walter's chest after we went to bed. He had eaten peach yogurt earlier, spilled a drop, wiped it clean, and then changed out of that shirt into his pajamas. I knew none of this, only that I could smell peach. I can catch a whiff of lightly scented flowers that I never noticed before. I can smell the biscuits in the oven about two minutes before the timer goes off.

I think it's kind of neat to have this trait? skill? talent? passed on from Erin. Or at least I did until the last couple of weeks. Recently, I haven't needed enhanced powers of smell to interact with my world. In fact, I have wished my old snoz worked less well. . .a lot less well. First, there was the ammonium nitrate explosion with its accompanying rank scent. Then, there was the time last week that I forgot to leave the dog protective device (rubber bands) on the cabinet doors where we store garbage can. The tang of salmon skin strewn around the house can overpower even mediocre smellers. The worst? A goat drowned in the lake on Friday (and Willie had absolutely nothing to do with it, I promise), and our neighbors (whom I have written about before) chose to store the carcass on the open ground right across the fence from us. Merriam-Webster's doesn't have a long enough list of synonyms for stench to describe what this is like. I have desperately been trying to dial back my newly acquired super sense of smell.

Unfortunately, I think it's here to stay. That's why I'm glad I didn't go with my mom and her friend Jo Anne on their birding expedition Saturday morning. They didn't spot any kites at the sod farm, but on the way they did shoot this photo (catfish heads, if you can't tell). I'm glad it's not scratch-and-sniff. 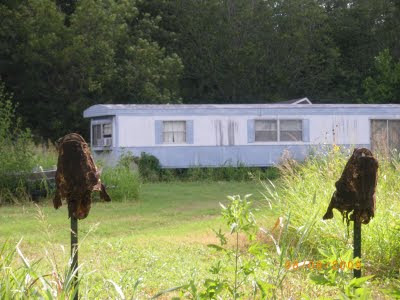 Did that make you say Hmm?