As a small child, my mom often sang me a cute, little tune from Guys and Dolls meant to make me feel warm and loved and happy:

Since I knew very little about units of measure at the time, I convinced myself the song was about a chicken coming to peck me. It did not evoke particularly warm, loving, or happy feelings. Living on a farm when I was about five did nothing to acquit chickens. Admittedly, they weren't as bad as the guineas, who chased me while scolding me with their high-pitched and incessant jabbering. No, the problem with real-life farm chickens is that they regularly got their heads chopped off on the stump in the back yard and then our landlord's wife, Mrs. Boettcher, would just sit there in the shade, plucking out the feathers and chitchatting away, like it was perfectly natural to hold a warm, dead, headless chicken on her lap.

Chickens don't always attack children (although as a side note, Davis and I saw a painted panel on the Dentzel Menagerie Carousel on Ontario Beach in Rochester last week that definitely depicted a giant chicken or possibly a rooster attacking a small child, who had no recourse but to stand with his hands raised, wearing a look of shock and dismay), and since 1965 I have not had to carry on a conversation with someone holding a recently dead chicken in a feathered or unfeathered state.

That doesn't mean that chickens worked out for me as I aged. Of course, in elementary school, I always rose to the challenge of playing chicken at recess. At my school (for you locals, this was at College Hills) playing chicken meant that two competitors would approach each other from opposite ends of the monkey bars and kick or grab at each other until one fell off. My special move, that led me to many triumphs, was to move quickly across the bars, swing towards my opponent, and wrap both my legs around his or her waist, then bounce and wiggle until their grip slipped. In one championship, I had to face Danny Merkel, reigning chicken champion and largest kid in the grade. I was on the little, bitty side. Everyone thought I was toast because mass usually trumped agility in chicken. I struck so quickly that to his mortification Danny fell faster than a load of stones. He immediately said that championships were always best two out of three matches, which I cockily agreed with. Then Danny proceeded to use my own strategy on me. I ended up lying on my back on the brick-hard ground with Danny straddling my chest, twice.

As the years rolled past, chickens continued to play a small, but unpleasant role in my life. My father hosted poker parties at our house from time to time when I was in high school (if you are an IRS agent, they usually played for match sticks, or if they played for something of value, my father always broke even). Once, when my mom and sisters were away, he let me hostess the party, which basically meant that I fetched plates of summer sausage and salty snacks from the kitchen and kept the, uh, malt-based beverages iced down.

At some point in the evening, one of the players got a hankering for fried chicken. He grabbed a handful of . . .matches. . .from his stack, handed me the keys to his car and sent me to Ron's Crispy Fried Chicken on the main drag. I protested that I was only 14 and didn't even have a learner's permit, and he waved me off, his concentration already deep into the next hand. I took the keys and . . .matches. . .and headed over to Gordon Street to Ron's. I parked without hitting anything (no drive through) and fairly quickly I had boxes of fried chicken in hand. It had gone so smoothly, in fact, that I thought I might just cruise the drag past the Dairyland parking lot, where all the extremely cool upper classmen hung out, before heading home.

Lo and behold, as I pulled out of Ron's and joined the flow of traffic moving down the street past the parked cars, driving with my right hand, letting my left elbow rest nonchalantly on the open window, and mightily hoping someone was checking me out, people at Dairyland started waving at me and making what I took to be "cool kid" gestures. I returned a gesture, maybe a thumbs up, and kept driving, thrilled that I had gotten noticed. When I got to the next block, turned off the main street and headed back to the neighborhood, I realized I couldn't see where I was driving. No headlights. Which I guess was the secret message the cool kids had been signaling to me.

In my first year of teaching at Vanderbilt, I finally got a handle on the negative encounters I had had with chickens over the years. I taught a business case about how to price contact lenses for chickens. You know that the concept of "pecking order" comes from chickens and other farm fowls who follow a dominance hierarchy which basically allows them to peck someone lower in the order bloody just because they can. In commercial flocks, farmers resort to beak trimming (a labor intensive, and possibly not fun job) to keep hens from hurting one another. The case's main question was whether you could manufacture and install contacts for chickens that would blur their vision enough to disrupt their awareness of the hierarchy (basically they wouldn't see well enough to recognize each other or any newcomers). Just the thought of contacts for chickens provided me with mirth enough to forgive chickens and move them to a sort of neutral plane where I didn't love or loathe them.

These days, I don't think of chickens very often. We eat chicken, but probably less often than the average American. When Erin was five and wanted her Aunt Jan to paint her toenails red, I did tell her that if she had red toenails, chickens would come and peck her toes. I regret telling her that and probably shouldn't have, even if I believed it. Recently, I injured myself slightly doing the chicken dance too enthusiastically, but I didn't hold a grudge.

Something happened last week that may increase both the frequency that I think of chickens and the esteem I hold for them. Some of you know that Walter has had a rough summer with his knees. He's a seven-day-a week workout guy. He gave up basketball, his true sports love, around the time that Davis had his tonsils out and had to stop running just a couple of years ago because of the stress on his knees. Since then, he has adopted a full range of other activities including swimming, using the elliptical trainer and exercise bike, walking, kayaking, and doing super-slow weight lifting. Over the past six weeks almost all of these activities started bothering his knees--even swimming. He tried every form of self-help he could think of: special knee braces (you can hardly imagine the number a variety of knee braces you can purchase on the internet), more and different stretches, and N-SAIDs. He iced his knees every evening to the point that I considered wearing a protective layer of flannel pants when I went to bed at night. When his knees became a vacation-limiting factor, he decided enough was enough.

He made an orthopedist appointment (something he had avoided because he figured an ortho would advocate surgery as a first option, not last resort) by phone from Cambridge. He went to the appointment at 9:15 on Friday morning and by the afternoon he felt well enough to hit the Rec Center. We all heaved a sigh of relief.

The miracle cure (here comes the punchline, and it isn't "Dismantle your phone. Put all the parts in a brown paper bag. Go out on your lawn. Swing the bag over your head and scream like a chicken" which was the punchline to a rather famous episode from the old Dick Van Dyke Show.) was that the doctor shot both of his knees full of CHICKEN COMBS to rebuild his synovial fluid.

Did you make it this far? I had to write a long story so you would scroll down far enough to see that I have added an online order form for those of you who now see the start of school approaching and haven't yet ordered your 2009-2010 school year lanyard. Order early! Order often! We have a great inventory, thanks to our growing number of local beaders and to Kristen Smith and the leaders and campers at 2009 PACAA.

Here is another reward. Erin's school photo from this spring (taken in mid-to-late February, I think). Remember to think good thoughts about Lifetouch when they hit you up for rather expensive pics of your kids this fall. 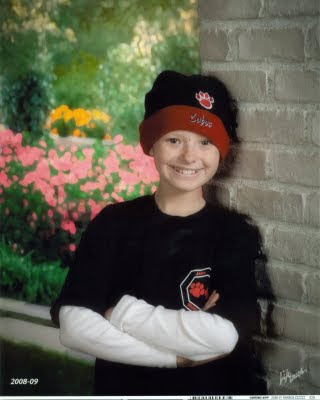