Position Opening--Best Dog in the Universe

If you go to the search box for this blog and type in "Willie,"  the first post that pops up will return:


Actually, the trip worked out just fine. Willie only ate a little woodwork around the kitchen bar area and Davis's second flip flop. He was not arrested, detained, incarcerated, nor did he become a ward of the state in our absence.


As you know, I had to do something about Willie. He doesn't chew stuff as often or as thoroughly as he used to (at one time I compiled this list of Willie Treats that he helped himself to), and in fact, the only materially important ...

And most entries that I mention Willie in prior to 2011 or 2012 are some variations on this theme:


Good call. We made it home, and I exercised The Wildman while Erin did her homework. Today Willie had only eaten about six mouthfuls of the bathroom cabinets, so I declared it a training victory.


Those of you who follow the Willie angle (DO NOT EVER, EVEN FOR A MOMENT, SWITCH THE "l" and the "e" IN THE PRECEDING WORD) are probably wondering what he did in our absence.


I had considered an entry organized around the theme, "Can Dogs Go to Hell?" in the aftermath of finding that Willie had eaten my Bible last week, but decided that weighty theological questions were out of place in an entry

I believe I once said:


Willie (named for William Marsh Rice) is a 10 month old Rhodesian ridgeback, lab, terrier mix. He brings the worst qualities of those three breeds and packages them in a 60 pound puppy body.


But all that was in the first half decade or so of his life when he was still a puppy (an increasingly old puppy).  Later he became more attached to us.  Less willful.  Less destructive.  More lovey-dovey.  More companionable and obedient.  Recently, Walter has taken to calling him the "Best Dog in the Universe."

It's probably best that you don't think about that too much because you really don't want to consider what that says about the state of academics. . . if one of the most prominent historians in the state can morph Will from "Wildman" to "Best" in any category that doesn't involve chasing, chewing, or general mischief or mayhem making.

Still, even I have been noticing that he wasn't providing that much fodder for the blog anymore.

That is, until today when we came home from church and lunch and found the miniblinds in our bedroom scroodled and scrunched in three different places and dog pee on the window sill. 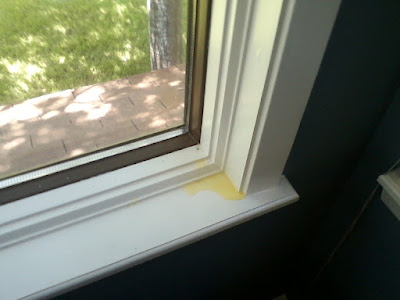 So now, apparently we have an opening at the top.  Qualified candidates are invited to submit their CV's for Best Dog in the Universe.  Dogs that climb and balance on foot stools to pee on window sills when taunted by naughty squirrels need not apply.